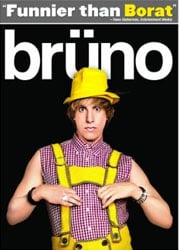 Sacha Baron Cohen’s Borat follow-up is Bruno, another hilarious character from the Da Ali G show! This comedy is both funny, and demonstrates a lot of things wrong with America (mostly dumb, ignorant religious rednecks). I don’t think this movie is for everyone but I think most Cohen fans will love this!

The movie is about Bruno, a gay Austrian fashion reporter who’s hell bent on becoming famous. After ruining a Milan fashion show, Bruno gets blacklisted and his TV show is cancelled. He decides to go to America with his assistant’s assistant Lutz and become uber famous. He tries getting acting gigs, starting his own talk show, fixing a world problem like the Israeli-Palestine conflict, even trying to create a sex tape with someone famous. None of that works, so as a last resort he tries to go “straight” by talking with a gay converter, joining the Army, going hunting and going to a Swingers party. The finale of the movie takes places in Arkansas, where “Straight Dave” premieres his ultimate fighting events. Only problem, all the stupid, inbred hicks that are there get something else that they weren’t expecting. Let’s just say a riot ensues after that…

Just like Borat, I was howling with laughter the entire time. This style of comedy is always funny to me, but it’s also very cringy. I don’t know how many times I can watch certain scenes because they are just painful to watch. For instance, I don’t know how many times I’ll be able to watch Bruno trying to seduce Presidential candidate Ron Paul or trying to sing to Israelis and Palestinians. It’s very awkward, but really, really funny. I think the best moments of the movie are when Bruno is trying to become straight. Going to the Army was hysterical and I’m surprised they didn’t stick Sacha on pots & pan duty from the start. The gay converter scenes were great, and shows how whacked out (and out of touch) religious people can be.

If I had to pick one scene that had me laughing the most was either the test screening of his show or when he was miming having sex with one of the guys from Milli Vanilli. Part of the brilliance of Sacha Baron Cohen is his ability to improvise on the spot with “ordinary” people. The things he says to people is just hysterical, and I’m sure the people he interacted with probably thought it was all real. The other funny part about this whole style of comedy is how people react to what he says. When he’s interviewing parents about their children, it’s scary to think that these parents are willing to do. Have their kids dressed up like Nazis or hung on a crucifix, all for the sake of getting famous. The finale of the movie was fantastic because Sacha tricked all those rednecks into thinking they were seeing ultimate fighting. The people in that audience were just downright SCARY. I thought Upstate, New York had some scary individuals but I think Arkansas takes the cake.

Now, a lot of people were talking about what was real and what was fake. You find out all the juicy details in the enhanced commentary with Sacha Baron Cohen and Larry Charles. I highly recommend checking that out that because they stop and play the video to discuss stories. You find out that Cohen almost got badly hurt or killed by a group of Jewish people. From what I saw, most of the stuff that happened wasn’t staged but some things were setup like Richard Bey being in on his appearance, the car skidding on the road, the social worker that takes little OJ away, and the stripper/dominatrix at the swinger’s party. There was a funny story about when Sacha went to the Army and the commanding officers didn’t know who he was, they just thought he was Bruno. Well it turns out all the cadets knew who he was but they weren’t allowed to speak, so the CO’s found out the hard way 5 hours later. The other bonus features include a lot of funny deleted & alternate scenes. One of those scenes involves LaToya Jackson, in a similar scene to the Paula Abdul scene. It was removed from the movie because of Michael Jackson’s death, but I felt they should have just included it in the movie anyway.

Bruno is definitely not for everyone, and some people will hate this. I would say you need an open mind when it comes to this because there’s lots of male nudity, and things that are just flat out gay. It is about a gay fashion journalist after all! If you’re not comfortable with that, then this movie isn’t for you. This certainly isn’t Borat where Sacha exposes Americans for their racist attitudes towards Middle Easterners. I saw a lot of parents bring their teenage kids to this at the movie theater and walk out half way through. This is a different movie, that’s offensive, controversial but also very funny! Bruno is part social commentary, part comedy and works on all levels with me. If Sacha makes another movie like this, I’m not sure he’ll be able to top himself with Borat and now Bruno.