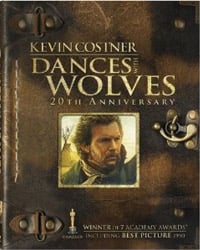 Dances with Wolves is one of my favorite movies and it’s finally available in all its glory on Blu-Ray. If you got an afternoon to kill, this Blu-Ray isn’t to be missed!

Everyone should at least have an idea what Dances With Wolves is about by now. It’s only been out for 20 years for crying out loud. I’ll just glance over the plot a little for people who are too foolish to have not seen this epic film yet. Dances With Wolves takes place in the mid 1800s and centers around Civil War veteran First Lieutenant John J. Dunbar (Kevin Costner). He receives a citation for bravery and is given a horse and choice of posting. He decides to go out to the Great Plains to see the Western frontier before it’s all gone. Fort Sedgwick is abandoned and in disarray, but Dunbar chooses to stay and man the fort himself despite the condition and threat of Indian tribes nearby. The Sioux tribe try to steal Dunbar’s horse a few times, and try to force him off the fort. He decides to establish dialogue with the Sioux and eventually and slowly, the tribe respects John Dunbar and allows him to stay at their camp. While there, he falls in love with a white woman Stands With A Fist (Mary McDonnell), who was raised with the tribe. Dunbar soon finds himself changing his way of life and embracing the Indian lifestyle.

Like I mentioned above, Dances With Wolves is one of my favorite movies and one I find myself watching at least once a year. I have Native American blood and was really interested in the culture (well, still am) back in high school. So seeing this movie definitely sparked my interest in Native American history and culture. What Kevin Costner did with this movie was make Hollywood appreciate the culture as well, and actually cast Native Americans instead of white people like we’ve seen in the past. From what I hear, the language spoken in the movie was what female Indians would say, but hey at least they spoke in the Native tongue. Imagine what this movie would have been if it was a bunch of white people with makeup saying “Me Indian, Me kill you now white man.”

But besides the excellent story and the interesting characters, the film had magnificent cinematography and film score as well. I just love watching this movie for those 2 things alone! I always wanted to visit the Great Plains just based on Dances With Wolves and I’m sure I’d have John Barry’s masterpiece of a score playing in my head. The expanded edition of the movie is practically 4 hours so unless you got half a day to watch this, maybe this edition isn’t for you? But I consider it the true edition since it fleshes out some of the story and characters. It’s hard to describe what was added into the movie because there’s over 55 minutes added back into it. More scenes in the beginning of the movie, during the civil war. There’s more scenes with Kicking Bird and the tribe, and an important scene with the soldiers of Fort Sedgwick. The expanded edition is the true version of Dances With Wolves.

I had the original Dances with Wolves DVD and then the Expanded Edition DVD after that. This 20th Anniversary edition Blu-Ray is essentially the Expanded Edition DVD, but only with a few other things thrown on it. It has extremely superior sound and video on the Blu-Ray, so getting the Blu-Ray is the obvious choice if you have a player. The look of the movie is superb; just beautiful! The audio is great and has DTS-HD MA 7.1 if you have the system for it. The Blu-Ray special features includes 2 commentary tracks, in movie features about military rank and movie make believe or real history. There’s a 15 minute new featurette about a day in the life of the Western Frontier that has quick interviews with Dances with Wolves author Michael Blake. I liked watching that one. There’s a retrospective documentary that was used for the DVD Expanded Edition, but it’s back on here again. Essentially, there’s not too much added to the Blu-Ray special features.

If you already own Dances with Wolves on DVD and want better quality, spring for the Blu-Ray! If you care about extras, you will probably be disappointed in them if you already owned the Expanded Edition DVD. I still highly recommend getting this film on Blu-Ray if you love the movie just as much as I do.