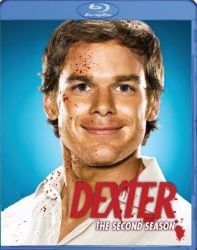 Dexter Morgan is back! Dexter’s still got that killer urge but it’s not as easy as it used to be. Hot on his trail, is Sgt. Doakes who never liked Dexter and is getting closer to figuring out the real type of person Dexter is. Starring the excellent Michael C. Hall as a serial killer, yet who is irresistible and funny. Everyone loves Dexter but he’s worried that his “work” will be uncovered. This season’s big story is the “Bay Harbor Butcher,” and I think that Dexter Season 2 is arguably better than Season One. Dexter is by far one of the best TV shows on right now.

As with each season of Dexter there is one major story arc. In season one, it was the “Ice Truck Killer,” in which Dexter had to find out who was savagely murdering people around the city of Miami, and it turns out it was someone closer to Dexter than he would ever imagine. In season two, the troubles hit closer to home for Morgan. The FBI uncover his “body of work” in the ocean, and dub the would-be killer, the “Bay Harbor Butcher.” On top of Sgt. Doakes constantly tailing Dexter everywhere he goes, he now has to deal with this entire investigation based out of his precinct. Leading the charge is Special Agent Lundy, played masterfully by Keith Carradine. I don’t want to spoil how it all turns out, but the investigation gets very close to Dexter, and he’s sweating bullets and imagining what kind of death he would prefer. On the home front, Dexter and Rita are going through a rough spurt. Dexter has yet to tell her of his big secret and as the relationship develops, Dexter gains more feelings for Rita and her children. He gets close, but Rita thinks it’s a drug addiction so she sends him to AA meetings. There, he meets someone that he connects more with, but is just as dangerous in Lila. A British bean-pole who immediately gets Dexter and what he’s all about, yet she is more than a handful for Dexter. Dexter faces tough decisions and that is in more ways than one.

Dexter in high definition looks amazing. I think I was disappointed going from Season 1 Blu Ray to watching the second season on DVD at first but now I can have comparable sets, both in high definition. With a setting as beautiful as Miami is, the show looks perfect in high definition. I could barely notice any film grain either. The audio was in TrueHD 5.1 surround sound and came through excellent. Not too many features on this set, but what you are paying for is the series. 12 episodes that are just phenomenal, but it’s a real shame there are not many featurettes on here, and most of them are through BD-Live. It would be nice to get some real making of documentaries, outtakes, and deleted scenes.

Dexter has quickly become one of my favorite shows on TV and I can see why it’s always nominated for awards. Michael C. Hall was born to play this role. He’s got that look and let’s hope not in real life. The cast is excellent and I love the backdrop of it being in Miami. It gets tiring constantly seeing shows and films being shot in L.A. I’m looking forward to seeing Season 3 before Season 4 airs in the fall. Now is your chance to catch up!