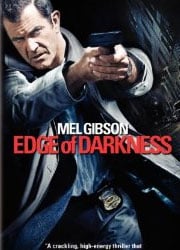 Edge of Darkness is the newest movie that stars Mel Gibson. It’s been about 8 years since Mel Gibson last starring role but glad to see he’s back acting again. This movie was dark, intense and not what I expected…which is a good thing!

The movie starts off with Thomas Craven (Mel Gibson), a Boston detective, picking up his daughter, Emma (Bojana Novakovic), at the train station. She’s quiet and doesn’t seem the same as usual, and ends up puking near their car. While at home in the kitchen, she gets a nose bleed and starts to puke again. She begins to tell her Father something as they step outside to go to the hospital. They are greeted by a masked gunman who shouts “CRAVEN!” and shoots Emma with a shotgun. She ends up dying in Thomas’ arms. Thomas thinks the people who did this were targeting him.

As he begins to nose around, he realizes that he’s getting into something much more bigger than just finding his daughter’s killer. His daughter and activist friends uncovered something really important and dangerous about a local company called Northmoor. While investigating the murder and Northmoore, Thomas meets a man called Jedburgh (Ray Winstone) who’s a “consultant” who’s there to prevent Thomas from finding out that info. The two get along and he allows Thomas to continue investigating the matter. Thomas Craven wasn’t the main target before, he certainly ends up being the target now as he gets closer and closer to finding out the truth.

Edge of Darkness is based on a 80s BBC TV series of the same name. I’m not sure how that was but I ended up liking Edge of Darkness. It was intense at times, the subject matter was a bit dark but what thriller isn’t? The movie is a little bit long but I never got entirely bored from it, I just think they could have cut it down 15 minutes worth of stuff. It was nice to see Mel Gibson starring in movies again. I always end up liking the majority of his movies; obviously Braveheart being my favorite. His Boston accent wasn’t that bad I thought, and somewhat tolerable. I thought the part with him talking to his dead daughter should have been cut from the movie. I know people cope in different ways, just seemed out of place with the rest of the movie.

The DVD extras included some additional and alternate scenes. They mainly featured Ray Winstone’s character Jedburgh and him talking to one of the guys that hired him. I thought the movie was long enough as it is so I can see why some scenes were deleted or were different.

Edge of Darkness was an interesting action thriller, had some good acting from Mel Gibson and Ray Winstone. Danny Huston also did a good job as a bad guy. No offense to him, but he just looks like a bad guy. I guess that’s why he’s been a villain in a few movies now. But if you’re looking for an intense action thriller, give Edge of Darkness a shot.