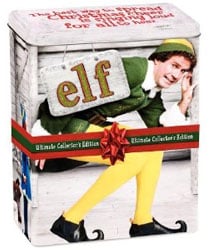 “Buddy the Elf, what’s your favorite color?” Elf is the best modern day Christmas movie since National Lampoon’s Christmas Vacation. Warner Bros and New Line decided to re-release/re-package the movie with some Holiday goodies, which is why it’s called Ultimate Collector’s Edition?

Elf is about Buddy the Elf, a human that ended up in Santa’s bag as an infant and ended up being raised as an Elf by Papa Elf. Buddy is raised not knowing he’s an Elf, and isn’t up to speed on being a good worker Elf (because he’s human). Papa Elf decides to tell Buddy that his real Father is Walter Cobbs, who works at a children’s book company in the Empire State Building in New York City. The one downside to Walter being Buddy’s Dad is he’s on the naughty list. Buddy decides to leave the North Pole and meet his real Dad & family. Buddy finds out why Walter is on the naughty list and Walter has Buddy thrown out of his building since he thinks he’s crazy. Walter eventually comes around once he realizes the truth. Buddy tries to spread the Christmas cheer for all to hear since a lot of people aren’t in the Christmas spirit. If people aren’t in the spirit, that doesn’t look good for Santa’s sleigh which is usually powered by Christmas spirit and people believing in him.

If you haven’t seen Elf and you love Christmas movies, you’re really missing out! Jon Favreau manages to bring in elements from other Christmas movies and TV specials and put them into this modern day Christmas movie that is really enjoyable. It’s the first Christmas movie of the season that I watch with my fiancee. Well, either this or Christmas Vacation. Both are my favorites and I might watch them at least twice each Holiday season. Elf didn’t start out as one of my top Christmas movies over the years, it just gradually became it because I just liked it so much. I liked it from the beginning, but like it so much more each year. Will Ferrell is perfect as a man-child human/elf, and isn’t so overly the top like he can be sometimes. James Caan plays a grump very well. Zooey is sweet and a nice choice for Buddy’s girlfriend. This was also the first time people realize she could actually sing, before starting her band She & Him with M. Ward.

Like with the other Warner Bros “Ultimate Collector’s Editions,” this is just a re-packaging set filled with some holiday stuff like a magnetic picture frame, gift tags to put on gifts, a sampler of the soundtrack, and a holiday stocking. For the price of the set, why not give people the full soundtrack? I liked the stocking and will be hanging that up this year. That stuff fits in the tin box, as well as the 2 disc DVD. The DVD is the original release I believe which makes this pretty pointless to buy if you already own the movie. There’s no extra features or scenes added to the DVD. I’m not sure if the Blu-Ray is the same way though.

Elf is funny and entertaining for both kids and adults. It has plenty of lines that are very quotable, Christmas music, Christmas/winter stuff to get you in the mood, and of course Santa, elves and the North Pole. Every year I watch Elf and I pick up on some jokes I might have missed the last time. I think it’s a timeless classic now and think it’s up there with Christmas Vacation, Christmas Story, Rudolph, Frosty and Emmet Otter’s Jugband Christmas. If you don’t own Elf on video, this is a logically choice. You get a few holiday goodies as well! But if you own Elf already on DVD, this isn’t worth buying.