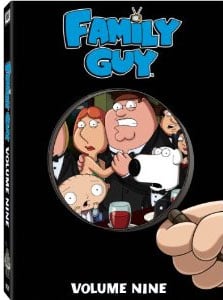 The latest Family Guy volume is out now on DVD and it features episodes of the 8th and 9th season. Family Guy is still funny and I love to watch the show, but its not as good as it used to be. But the newest volume is worth seeing just because they are uncensored! The extras aren’t bad either!

The first episode in the volume is from the 8th season and Peter takes over Carter’s company while he gets better from a heart attack. The next episode is about Peter getting amnesia, and trying to get him to remember his old way of life. He quickly becomes bored of that and wants to sleep with endless amounts of women instead. Other episodes includes: Meg falls in love with a criminal and becomes one as well, Stewie pulls a Tootsie to get an audition for a show, Peter becomes a paparazzo, everyone thinks a black hole is going to end the world but it’s only an April Fools joke, Quagmire’s Dad gets a sex change operation, Peter and the guys track a source of a dirty joke. One highlighted episode is And Then There Were Fewer which is sort of a Clue/who done it murder mystery featuring a lot of characters from the show. It’s almost like a movie in a way, and a few reoccurring characters are killed off in that episode.

Family Guy is getting less funny for me (sometimes) but I still watch the show. But with that said, I think after re-watching these episodes I enjoyed them more than the first time. Family Guy is a show where the more times you watch the episodes, the more you laugh at them. The re-watch factor is big for the show. I think my favorite episode was the murder mystery episode. It was just an episode that was really funny, and grand in scale. I thought it was funny that the intro was just 2 minutes of them driving a car to the mansion. It was also nice to see some characters get killed off, but kind of wish they didn’t do anything with James Wood. I like that he was a villain on the show…oh PIECE OF CANDY! I think my least favorite episode was the 150th episode where Brian and Stewie get locked in the bank vault. It just wasn’t really funny, and was boring for me too.

The Family Guy Volume 9 DVD has a bunch of extras on it which is nice. There’s a lot of funny deleted scenes, Comic Con 2010 panel, audio commentary on select episodes, a making of featurette “And Then There Were Fewer” and some animatics. The deleted scenes were really funny, which makes me think that the funniest stuff was cut from the show. I think it was cut mainly because it was really offensive. Who knows, but they should have used a lot of these jokes. The Comic Con thing was great to see, since I never go to those things. The making of fun featurette was also cool to see as well since you don’t normally see what goes into making a Family Guy episode.

Volume 9 has a lot of funny episodes on it, but it also has some duds as well. That’s how the newer episodes are to me, some are great and others leave me scratching my head thinking why people thought to make this episode. Hopefully the next volume will be on Blu-Ray as well.

Features:
Commentary By Series Writers, Directors, Producers and Cast Members
Deleted Scenes
Brian and Stewie: The Lost Phone Call
Who Done It? The Making of “And Then There Were Fewer”
The History of the World – According To Family Guy
Family Guy at Comic-Con 2010
Side-by-Side Animatics
More From Fox – An Episode of The Cleveland Show with Special Introduction from Mike Henry