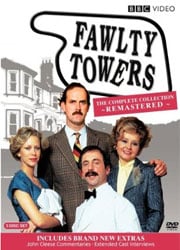 One of the funniest TV shows ever is available in a new remastered DVD set. The DVD features all new audio commentary from John Cleese, new interviews from 2009, and other goodies. If you don’t own this UK comedy series on DVD yet, now’s a good time to get it!

Fawlty Towers stars John Cleese as Basil Fawlty, a rude, witty, angry and grumpy hotel owner. Prunella Scales plays his nagging wife Sybil, Connie Booth plays the maid/waitress Polly, and Andrew Sachs plays the bellhop/waiter Manuel. The hotel is set in Torquay, Devon, UK and the series was filmed in the mid-to late 70s. Each episode sees Basil Fawlty either gets his patience tested, or you see him going over his breaking point. Either his guests, wife, Manuel make him go insane or it’s something that he’s gotten himself into. Basil’s overly angry attitude makes for some hilarious moments, especially when it involves Manuel, who’s from Barcelona. Basil usually takes his anger out on him by slapping him or poking him in the eyes because of the language barrier. The way he treats his crew and the guests is hysterically funny but what’s funny is how scared Basil is of his wife. Pretty much all his wife has to do is shout his name, and he’s like a deer caught in headlights. Of course, if I was Basil, I would be cranky and making wiseass remarks to the guests too. Each episode sees someone new that Basil can’t stand or put up with. One episode it’s an old lady who can’t hear or the next episode it’s a guest who’s extremely picky or it’s a bossy American wanting a Waldorf Salad. The TV series mixes slapstick, sight gags, black comedy, and intelligent jokes and the result is some of the funniest stuff you’ll ever see!

I’ve been a fan of Fawlty Towers since middle school. My grandfather used to watch the show all the time on PBS and had some VHS tapes. So when I was at his house, I’d watch some of those episodes with him and the rest of my family. It was great to see him cracking up laughing at the episodes, since I don’t think I’ve seen him laugh as much for a TV show except Seinfeld. After that, I’ve just become a huge fan of the show. It stinks there were only 13 episodes of the series, but that’s the way things were done over in the UK. 6 episodes here and there and it’s a wrap for a season. The quality of episodes is better when things are done that way, but the fans suffer because we only get a few episodes a season. But with each episode, I can only watch in spurts because the guests on the show are so irritating. It’s a bit draining to watch Fawlty Tower’s episodes sometimes, especially since John Cleese is shouting and yelling in every episode.

If you never saw an episode of the show, I’d highly recommend a few episodes to watch. The best episodes in my mind are “The Hotel Inspectors,” “The Germans,” and “Communication Problems.” Those 3 episodes define Fawlty Towers. There are other episodes that are classic too but those 3 are my favorite. I still crack up when Basil mistakenly touches a woman’s breast, thinking that’s where a light socket is on the wall. You’ll just have to see it in the “The Psychiatrist” episode. “The Anniversary” episode is just cringy since Basil is lying to his wife’s friends about why she’s not around. One lie after another. To me, Fawlty Towers was one of the first comedies to be cringy. Sometimes I just have to bury my face in my hands because it’s tough to watch. But that’s the brilliance about the show, it will make you laugh your ass off and then next minute it makes you cringe. The TV series is certainly one of the most influential shows ever.

Like I said above, the DVD is remastered so the episodes look better than the previous releases. Honestly, the show could still use some major cleaning up but not sure that’s possible. I guess this is the best it’s going to look on DVD. The 2009 interviews with the cast are really good. The new audio commentary with John Cleese is decent, and it’s interesting to see how hard he is on the show. He talks about what jokes or setups worked, and what didn’t. But a lot of the time he’s just cracking up laughing watching the show. I believe the other extras included on the DVD were used in other Fawlty Towers releases but not positive about that. Either way the 2009 interviews and the audio commentary are the selling point of the extras.

If you’ve never seen an episode of Fawlty Towers, be sure to check out this series! It’s not for everyone, but give it a shot to see if you like the series. John Cleese is brilliant, and so is everyone else involved with the show. The writing is excellent; the jokes are plentiful, which makes you want more and more episodes. In a list for 100 Greatest British Television Programmes, the shoe ranked number and I can believe it!