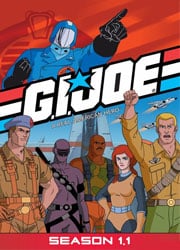 “YO JOE!” G.I Joe is being re-released on DVD by Shout Factory and I couldn’t be happier. I used to watch G.I Joe all the time growing up, and I used to collect the action figures as well. The Season 1.1 DVD will bring back a lot of memories to people that originally watched G.I. Joe.

G.I. Joe: A Real American Hero is based on the Hasbro toy line and the Marvel comics. The beginning of the cartoon series started out as a 5 episode mini-series which then spawned more mini-series sequels. After the mini-series, more stand-alone episodes were produced along with a feature length movie. The first 5 episodes were called “The Mass Device.” We are introduced to the characters of the G.I Joe, a Special Forces team that battles the evil-doers of COBRA. COBRA is a terrorist organization that will stop at nothing to achieving their goals of world domination. COBRA is lead by Cobra Commander and Destro. They also have a slew of minions like Major Bludd and Baroness. G.I. Joe’s leader is Duke, along with Flint, Scarlett, Snake Eyes and Gung-Ho. I can go on and on about the characters of both sides. All you have to know is that both sides scream their names over and over again. People now can play a drinking game every time someone screams “Yo Joe” and “COBRA!” You’ll be loaded in the first 5 minutes. Season 1.1 contains 3 mini-series (The MASS Device, Revenge of COBRA, The Pyramid of Darkness) that started off the G.I. Joe animated series.

I haven’t seen G.I. Joe in many years so I was really looking forward to watching this series again. It brings back lots of memories from my childhood including the animated series but all the toys as well. I can’t believe how many action figures and other G.I. Joe toys I owned with my brother. It definitely rivaled my Star Wars collection but I actually still own my Star Wars collection. I decided at one point growing up that I needed money and sold lots of the G.I. Joe toys. The rest were blown up with firecrackers on 4th of July. I was stupid, what can I say.

Anyway, the 2nd mini-series was a lot better because it introduced a lot of different characters than the original G.I. Joe mini-series. We get introduced to Storm Shadow, Zartan and the Dreadlocks, Shipwreck, Spirit, Roadblock, Flint and many more. It’s hard to believe all those popular characters didn’t originally show up. Snake Eyes and Storm Shadow were always one of my favorite characters, plus Gung-Ho, Shipwreck and naturally The Evil Twin Brothers…because I’m a twin. After watching the series after all these years, I still can’t believe how many times they say Yo Joe and Cobra. Surely they could have said something else? Plus, how come no one ever died! Everyone escapes JUST at the nick of time. You can get by the episodes pretty quickly if you decide to watch them on DVD. You have the theme song and intro, a recap and then a recap at the end of the next episode. When it’s all said and done, that’s like 18 minutes of the cartoon. Plus, the original episodes had the hilarious PSAs.

The DVD quality is decent enough, but obviously the animation looked dated. I’m sure if you watched these on VHS, it would be all grainy. I had no problem with the quality, and not sure how it compares to the discontinued Rhino DVD sets. Considering those are out of print, this is a good option to get this DVD. One thing that was great about G.I. Joe was the vast amount of characters and the talent of the voice actors. Many of the actors you’d hear are also from Transformers like Peter Cullen, Frank Welker and Chris Latta. Plus, I just love the look of the animation. This show will be something I’ll always watch now that it’s back on DVD.

The extras included on the Season 1.1 DVD are the PSAs, the toy commercials, looking back with creator Ron Friedman, and a couple of other things. I’m glad the original PSAs are included because those things were always something I remembered most from the animated series. Plus no one can forget the remix versions that were popular on the internet from a few years ago. “PORKCHOP SANDWICHES!” I wish those were included on here as well. It was hilarious to see some of the toy commercials, because I still remember a lot of them. When you’re a 80s kid, you remember a lot of things like that. The featurette with Ron Friedman was great, as he talks about the toys and writing for the show. It’s broken up into few parts on each disc. I wished it was just put together all in one featurette.

If you ever watched an episode of G.I. Joe or collected the toys, be sure to get this DVD! The episodes are still entertaining yet kind of outdated. But with that said, I still can’t wait to check out the 2nd season of G.I. Joe. That season sort of jumped the shark with the addition of Sgt Slaughter though. But I’m still looking forward to that DVD.

…And Knowing is half the battle!