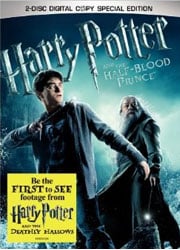 Harry Potter keeps getting darker and darker and I love it! The latest movie flew into theaters this summer and is now out on home video…just in time for the holidays! The Half-Blood Prince book wasn’t my favorite but I think the movie is the best Harry Potter movie since The Prisoner of Azkaban!

Lord Voldemort and the Death Eaters’ powers have grown and they begin attacking the Wizarding and Muggle worlds. Hogwarts is no longer safe as Voldemort finds new ways of trying to get into the school and attack Dumbledore (Michael Gambon) and of course Harry Potter (Daniel Radcliffe). Voldemort assigns an important task to Draco Malfoy (Tom Felton), and Snape (Alan Rickman) gets sucked into an Unbreakable Vow with Draco’s mother to watch over him. If Draco fails, Snape has to carry out the important assignment. Meanwhile, Dumbledore and Harry recruit Dumbledore’s old friend and colleague Professor Horace Slughorn (Jim Broadbent) to come back to teach potions. The reasoning behind that is Slughorn possesses some vital information concerning Voldemort that Dumbledore seeks. Throughout the school year, Dumbledore shows Harry his memories about Tom Riddle/Voldemort and prepares him for what lies ahead. The two eventually learn what must be done in order to defeat the Dark Lord but it’s not going to be an easy task. While all this is going on, Hermione (Emma Watson) is upset that Ron (Rupert Grint) is dating a loony girl named Lavender Brown; and Harry ends up dating Ron’s sister Ginny (Bonnie Wright). Love is definitely in the air at Hogwarts this year!

Half-Blood Prince exceeded my expectations greatly. I felt slightly disappointed with The Order of the Phoenix’s adaptation but after seeing multiple viewings, I expected it for what it was. This film left out things as well but the overall story was still intact. The scenes missing from the movie that I wish were included: the funeral scene at the ending, more pensieve scenes and the Hogwarts battle at the end. I can see why they left out the battle between Hogwarts and Death Eaters because it might be redundant with the next installment. It was nice to see Quidditch back in the movies; I’m sure fans would have wanted to see more of it but I felt there was just enough of it. The stuff with Lavender Brown was hilarious; the actress playing her did a good job because she acted very stalker-ish and crazy. I liked the addition of Bellatrix Lestrange and Fenrir Greyback attacking the Burrow. It added some excitement in the middle of the movie. I don’t know what will happen with the Weasleys’ home in the next movie, wasn’t their a wedding there in Deathly Hallows? But I still liked that scene a lot.

I had a problem with David Yates in the last movie, but I think his style either has grown on me or his direction was far better in Half-Blood Prince. I loved how the Death Eaters attacked London, and all those shots in the beginning of the movie. The special effects were fantastic, especially the effects of the death eaters flying and the pensieve. The acting was great as usual, especially Michael Gambon, Alan Rickman and new cast member Jim Broadbent. The first two, this was their movie to shine and they did so. I always think we should see more of them but what can you do, I’m not the director. Broadbent’s character was a bit wacky, and he played him very well. He almost reminded me of one of the characters in Monty Python’s “Upper Class Twit of the Year” sketch. As far as the other main characters, they all did their roles amazingly. They all have grown up, matured…just like their characters. Tom Felton who plays Draco did a great job this time around as well.

The DVD special features were pretty good. I’m just glad Warner Brothers decided to include extras since they haven’t been doing that lately. Fans are treated to a teaser trailer to the Deathly Hallows, additional scenes; close up interview with the cast, a sneak peek at the Harry Potter section at Islands of Adventure/Universal Studios in Orlando, Florida and a few other cool things. The additional/extended scenes weren’t that long and kind of disappointing. I thought maybe they would have filmed a funeral or something. The only scene I thought that deserved to be in the movie was, when Snape and others are at Hogwarts and noticing terrifying clouds approaching. It was done nicely with choir singing and really shows that Snape isn’t a complete jerk and thinking about what’s to come. He’s just staring at the window, knowing what’s coming.

I liked the featurettes with the cast, and the cast members interviewing crew members. My favorite extra was getting a sneak peek at The Wizarding World of Harry Potter in Orlando, Florida. I really want to go and ride the roller coasters, have some non-alcoholic Butterbeer and just see the Hogwarts castle. Should be a lot of fun! There’s also a J.K. Rowling documentary which I didn’t get to see yet but I will. The Deathly Hallows teaser trailer was exciting to watch too!

Overall, Harry Potter and the Half-Blood Prince is the best Harry Potter adaptation since The Prisoner of Azkaban. Some hardcore fans might not agree but I simply loved this movie. I’m eagerly awaiting the Deathly Hallows: Part 1 and really happy they are splitting it up into 2 movies. More room for content and less room for them to screw it up! This DVD is definitely a worthy purchase.

Features:
– Additional Scenes
– J.K. Rowling: A Year In The Life
– Close Up With The Cast Of Harry Potter
– Get A Sneak Peek At The Wizarding World Of Harry Potter
– What’s On Your Mind?: Q&A
– Cast Members Sum Up Their Characters In One-Minute Drills