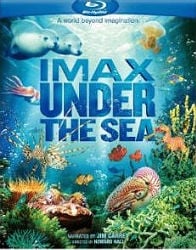 From the creators of Deep Sea and Into the Deep, comes IMAX: Under The Blue Sea, with the star being the ocean and its sea-life. Originally filmed for IMAX 3D, Howard Hall and his team have brought together some powerful and beautiful images of the most exotic underwater creatures. Narrated by Jim Carrey, Under The Sea is a short 40 minute film that helps viewers understand we are not the only things in this universe.

Filmed by experience underwater filmmakers, this brisk film takes place over some of the most out of reach oceans in this world, some being Papua New Guinea, Indonesia and of course, The Great Barrier Reef off the coast of Australia. With massive IMAX cameras, divers set out out to explore and show viewers what inhabits the deep blue sea. Gorgeous creatures like sea turtles, crabs, venomous snakes, adorable sea lions, and not to mention The Great White Shark. With a proximity to these creatures that is so close, it will make your skin crawl, the filmmakers do a great job of really getting up close and personal to show how these creatures interact with each other and inhabit the ocean.

On top of the 41 minute film in beautiful High definition Blu ray, the DVD is a companion piece. The blu ray quality was outstanding. The filmmakers really wanted to drive home the fact that what you see on film is what they were seeing down in the ocean. The colors and vibrancy is astounding, and one can hope we could all visit the ocean like they all did and witness it with our own eyes. Well, this is the next best thing. The IMAX cameras are so enormous and cumbersome, but they deliver on quality as seen in Under The Sea. The soundtrack makes watching the film soothing, and even Jim Carrey’s voice is not overly dramatic, and he is for the most part not his goofy self. The audio track also does a great job of conveying the sounds heard in the ocean by the critters. The quality of both the audio and visual makes you scratching your head to believe if it’s really real life or something done by a computer.

The extras are limited like the film, and I really thought the film could have been longer. We learn in the extras the IMAX cameras can only hold 3 minutes of film at a time so it’s not something that can be easy to film. There were 5 short 3 minute featurettes, originally used on the website for fans following the filmmakers. I wish they did some editing though and cut out all the unnecessary introductions and credits and bridged them all together. Finally, “Filming IMAX:Under The Sea” was a short 10+ minute feature on the making of the film with behind the scenes footage and interviews with the filmmakers. I suppose quality over quantity is the way to look at this film. The running time is its downfall because you are amazed at the footage captured and you want more, but it’s better than dragging it out with footage that wasn’t on par with the rest of the film. I enjoyed it though.