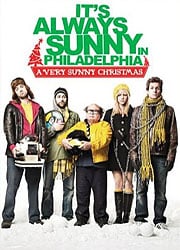 It’s that time of year again; time to get all of your seasonal decorations out of the attic and finish up your shopping in time for the holiday. The gang from Paddy’s Irish Pub are gearing up for the holiday in the special holiday DVD. A Very Sunny Christmas is a fun-filled tale of family, friends, and festive holiday cheer for young and old.

If you’re familiar with the show, the gang from It’s Always Sunny in Philadelphia (herein referred to as Sunny) aren’t the best role models. In fact, they are probably the worst people in the world, but this is why we love them. Their fantastic breed of inappropriate idiocy makes you laugh out loud, while wondering if you should be.

A Very Sunny Christmas is no different. Mac (Rob McElhenney) and Charlie (Charlie Day) relive their individual memories of Christmas traditions from their childhoods, while Dee (Kaitlin Olson) and Dennis (Glenn Howerton) attempt to teach Frank (Danny DeVito) a lesson about the error of his gift giving ways, with the help of “The Big Lebowski”, David Huddleston.

Mac and Charlie, while digging through Mac’s old Christmas presents, find a family video from the 80’s, where we learn that Mac’s family tradition was going house to house, stealing other family’s presents. Charlie tells Mac of how the Santas used to come to his house as a child, to “cheer his mom up”. After learning what this actually means (mom’s a prostitute), Charlie ends up in a bloody altercation with Santa at the local shopping mall while Mac and Charlie are there looking for a present for one of the families Mac stole from as a child.

Meanwhile, Dee and Dennis recruit the help of Frank’s former business partner, Eugene (played by Huddleston) in teaching Frank a lesson about the spirit of the holiday. They watch a video of their childhood, where Frank has given them a giant wrapped box, that ends up empty. As he exclaims “Fake out!” the video ends. They then take Frank to his old workplace, in the hopes of him overhearing how much people hate him. After nobody remembers him (and after a disturbing, naked DeVito is birthed from a couch) we are taken to Frank’s future grave, with the tombstone reading “He was a dick of a father”.

Everything culminates with Frank having a near death experience after a car accident, in which he has a Rudolph the Rednosed Reindeer-esque dream sequence, where an anatomically correct Christmas Elf shows him what his friends will do to him if he doesn’t get the Christmas spirit. As to not spoil the ending, I will tell you that Frank does get the spirit, if even for a minute.

Overall, this was a great episode of Sunny. For a minute, you almost think that it is going to end differently than every other episode of Sunny, just because it is Christmas, but it doesn’t, and that’s awesome. This DVD is certainly worthy of a spot on your DVD shelf if you’re a fan of Sunny, but if you haven’t seen the show yet, you would likely want to start from the beginning.

The extras on the disc aren’t too extensive. There is a short “Making of” documentary piece with some funny bits in it, and some deleted scenes of young Mac and Charlie that may or may not offend some people. There is also a holiday sing-along with the gang that quickly turns into a psychedelic nightmare that makes you have to look away at least once or twice.