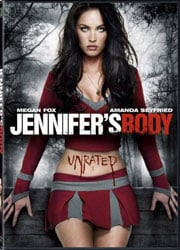 We all know the only reason why people went to see this movie was to see Megan Fox. But then again, not that many people went to see this movie to begin with and with good reason. I always try to view movies with an open mind but after seeing this, I just hated Jennifer’s Body. If you’re a fan of Megan Fox, might be better to watch her in Transformers.

“Needy” (Amanda Seyfried) and Jennifer (Megan Fox) have been friends since childhood. Jennifer has always been the popular hot girl, while Needy is the dorky best friend who seems like she has a crush on Jennifer. Needy’s boyfriend Chip (Johnny Simmons) warns her that she’s spending way too much time with Jennifer and he never gets to see her. The duo decides to go out to a local dive bar to see some crappy indie rock band called Low Shoulder. A mysterious fire breaks out in the club, leaving several idiot people dead. If there’s a fire in a building, you don’t stare at you fucking morons! The band lures Jennifer into their van since they think she’s a virgin. They must be stupid to think that. Needy is worried since Jennifer goes missing after that. She ends up showing up at Needy’s house all bloody and spewing up black vomit. People actually managed to make Megan Fox not attractive, good job with that one. Turns out, the stupid indie rock band sacrificed Jennifer in the woods to Satan, so they can become famous musicians. Maybe play better music and stop wearing lame eyeliner and you might get famous? Only problem is that she wasn’t a virgin so a demon takes over her body and turns Jennifer into a succubus. Now she’s on a rampage for lust and boys.

Hmm, where to begin with this movie? Sure Megan Fox is fun to look at, even Amanda Seyfried when she’s not all dorked up but after the superficial side of things, this movie is a stinker. The dialogue and story seemed like it was written by 7th graders or wanna-be horror filmmakers. I liked Juno and enjoy Diablo Cody in Entertainment Weekly but this is clearly not her best work. I think she’ll pull through and write something better. I did laugh at a few things people said, but overall the dialogue was awful. People blamed Megan Fox’s bad acting for this movie but I don’t think she was necessarily the problem. It was a combination of a lot of things: The crappy rock score (not the bands playing), the cheesy dialogue, bad acting, a stupid storyline, and bad direction. It was cool to hear Screeching Weasel in a movie, just wish it was a good movie.

I’m sure all the guys (and some girls) who have seen this movie know what the best scene is. That scene is when Jennifer and Amanda kiss & make out a little in their underwear. I don’t know if it’s worth the price of the DVD but it’s a nice scene nonetheless. But besides, there were some funny dialogue in there, it’s just more sporadic than I would have liked. I think this type of movie would have better served as a comedy thriller like Heathers. Instead the horror stuff just comes across really dumb and stupid. I would have liked the story to be about Jennifer who’s this hot girl who kills all these boys she’s with by stabbing them, not eating them. Maybe they were trying to do something different? I don’t know, but I didn’t like it. I didn’t like the way the movie ended either. Why have the results of what Amanda does in the credits part? Doing something like that proves that this director didn’t know what she was doing. Karyn Kusama also directed Aeon Flux, another piece of shit movie so it’s not surprising she messed this up. Or maybe Jennifer’s Body was just doomed from the beginning?

The only extras on this DVD edition are having the option to choose between an extended or theatrical edition. Wow, whoopee do. You can tell the studio have no faith in this movie because they barely included any extras on the DVD. I’m sure Megan Fox doesn’t even like this movie, she barely even mentioned it during her SNL performance. I’d recommend not seeing this movie, because I don’t think you’d really want to waste an hour and 45 minutes. But if you wanted to watch it for shits and giggles, than by all means go for it.