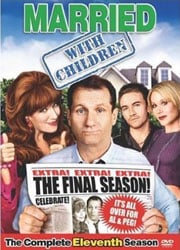 The final season of Married with Children is out on DVD, and it’s a bit sad that we won’t be getting anymore DVDs from the Bundys anymore. But even though the 11th & final season isn’t as good as the other seasons, these 24 episodes still made me laugh.

The first episode of the season is about Bud trying to scare a hot girl into sleeping with him by simulating a tornado. Ironically, a real tornado heads to Chicago and the Bundys and D’Arcys take shelter in the Bundy’s basement…where Bud is trying to score. Other episodes in the final season include: Kelly abstaining from sex to get a commercial; The Dodge ends up finally dying on Al; Kelly has a pet turkey and doesn’t want to kill it for Thanksgiving; Al is put on trial from other fatties that he has insulted over the years; Bud dates Al’s boss Gary; Peggy becomes a secret stripper and Al loves it; Al and Peggy decide to break up and be single but they are eventually get back together. The final episodes of the season/series are about Kelly getting engaged and almost getting married to the ex-boyfriend to the girl who holds the Bundys hostage. There really isn’t a final sendoff episode but that one is considered the finale.

Just like the last few seasons of the show, Married with Children was always a shell of what it used to be, and almost a parody as well. Things were over the top, the audience was annoying beyond belief and Married with Children was just becoming another typical sitcom that had been on the air too long. But with all that said, I still watched the show until the end and laughed each week. I remember some of these episodes in the final season, particular the Peggy stripping episode (for obvious reasons). But a lot of these episodes weren’t really THAT memorable to me. A lot of the same jokes were used over and over in the later seasons, and No Ma’am was done to death as well. I think the main reason why the show was canceled because Fox is notorious for moving shows around so it just lost its audience. This was back when there was no DVR either. I think the show probably could have continued if the schedule wasn’t jumbled around. But I’m not surprised it was canceled and shocked it lasted this long to begin with.

The biggest storyline this season was when Al and Peggy break up finally. That storyline spanned over 3 episodes, but in the end, they came back to each other. If I were one of the writers, I would have made that storyline the ending for the season & series. Al is just fed up with the family and either leaves them….or murders them. But that would have been too dark for the show. I think deep down, he loves his family; they just kill him each day with their crap. Not like he’s a winner or anything either, they are all destined to be a family together. The show never got a proper finale though because the network canceled the show after this season for lack of viewers.

With most of the Married with Children DVDs, the extras are non existent. I would have liked to have seen some extras for these DVDs, especially this season since it’s the last season of the show. But oh well, I guess the fans will just have to be happy to watch the episodes on DVD. If you liked the series, and even liked the later years; be sure to buy this DVD as well!