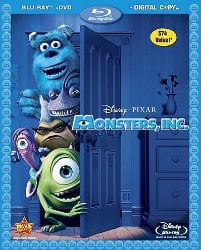 Pixar Animation’s fourth film, Monsters Inc, now available in Disney Blu Ray, continues to impress with yet another strong Pixar film. The big, fury, monster Sully (Goodman) and his one eyed friend Mike (Crystal) are some of Monsters Inc top scare team in the secret city of Monstropolis, and in order for the city to have power they must rely on the “screams” generated from Monsters Inc. The outside “Real world” never had any interaction with the city otherwise and are considered a threat to the health of Monstropolis. Of course that all changes with 2 year old “Boo” who sneaks in to Monstropolis after one of Sully’s shifts. Monsters, Inc is a cute family film with plenty of laughs, action and overall an excellent animated flick.

Remember growing up as a kid and always fearing what lurked in the closet? Well, Monsters Inc were responsible for those monsters. The company sends out scary creatures and there sole jobs is to scare children and make them scream. Each time they scream, it delivers some sort of energy to a capsule and that is delivered to Monstropolis to provide them energy to run the city. The top team atop the leader board of “Screams” is James P. “Sully” Sullivan (Goodman) and Mike Wazowski (Crystal). Sully is this big hairy bear looking monster that is leader in obtaining screams. Mike is his one eyed sidekick who helps him run things back in Monstropolis. A creepy chameleon lizard Randall (Buscemi) is hot on their tails and wants to be the leader in Monsters Inc. He’ll do anything to try and stop Sully and Mike. On top of the troubles they face with Randall, one night Sully discovers a 2 year old little girl, “Boo”, who sneaks into the Monsters Inc plant. If caught, this would ruin Sully and ultimately Mike as well. Monstropolis as a city would “crumble” since Humans found their land and they would be forced to live elsewhere. Human contact is not an option even though they run a risky business of scaring humans on Earth. It’s up to Sully and Mike to save Boo and return her safely to her bedroom without anyone finding out.

With this new Blu Ray set, Monsters Inc showcases some new special features as well as the original DVD release extras. Part of the new set features a look back at the film, with the Filmmaker’s round table. In the feature they discuss everything they loved about making the film, and what hard work and dedication went into it. It also features clips and scenes from the film, which help with exactly what they are talking about. The one I was jealous to see was the new ride in Tokyo Disneyland where it shows the making of the new Monsters Inc ride there. To get the idea of how the ride is, it most resembles the Toy Story ride at the Magic Kingdom. The ride looks like a lot of fun and makes me want to visit Tokyo Disneyland. With the ride, they recreated Monstropolis and you ride around in cars shining flashlights on any Monsters you spot through the attraction. I believe you obtain points for each monster you spot. Sounds like a blast! The other extras were the award nominated shorts For the Birds, which was showcased prior to Monsters Inc in theaters and the newer short “Mike’s New Car Short” which was cute. I particularly enjoyed the look at Pixar Studios tour back when they were still a smaller organization and how insanely cool it must be to work there. To be surrounded by such creative people and have fun at your job at the same time, has got to be the best way to work. With the blu ray release, you also get a standard DVD copy as well as a Digitial Copy so all bases are covered. You gotta love Pixar/Disney!

As expected with any Disney/Pixar Blu Ray release, this film looks amazing in High Definition! The colors have so much depth and clarity, and you can certainly appreciate with animation as colorful as this. In glorious 1080p this is how to view high definition films and Pixar movies. The audio track is just as strong and delivers booming base when needed and the soundtrack comes across nicely as well. Monsters Inc may not be the most popular or strongest of the now, ten Pixar films, but it still provides plenty of laughs and shares a great fun adventure story along with it. Billy Crystal and John Goodman are excellent as Mike and Sully, along with Steve Buscemi as Randall. I cannot picture anyone else lending their voice to these characters and that is a credit to the actors. We can only hope Pixar has plans for more Monsters Inc in the future.

Disney Plus Premiered Monsters At Work Trailer This Morning