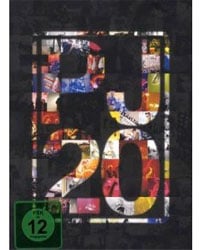 Rockumentary and Pearl Jam fans will want to check this documentary from Cameron Crowe (if you haven’t already). I particularly liked it because I enjoy Pearl Jam’s music and I’m a big fan of music documentaries. But I also felt the movie seemed to lack a flowing narrative and could have been slightly better.


Pearl Jam have been around for over twenty years and Cameron Crowe decided to film a documentary based on the band’s career. The documentary glances over the pre-Pearl Jam days with Mother Love Bone. Then goes into how how the band got together, coping with mega stardom in Europe and The US, fighting Ticketmaster, the festival tragedy in 2000 and all the stuff in-between. The film contains a lot of concert footage, like Vedder’s notorious performances of singing and then scaling walls, scaffolding and crowd surfing.

Crowe collected over 1200 hours of footage of Pearl Jam, but for some reason there still seems like there’s a lot missing from this movie. At times the movie feels jumbled and not necessarily a flowing narrative. I guess you can describe the documentary as having a big themes or parts that are focused on the most, with little things thrown in between. It’s not necessarily a start to finish story about the band, but it’s still an overview of what happened with the band. I think Crowe is more focused on making the movie look “cool” than telling people about Pearl Jam. Perhaps I need to watch this again and see if my mind changed. I don’t know, I liked the movie and learned some things about Pearl Jam, but still felt like there was much more to know or see.

The DVD contains few featurettes like a house tour of Vedder’s house, Mike McCready writing Faithfull, Matt Cameron writing The Fixer, and some concert footage as well. Definitely check out the extras after the documentary. I’m sure when the Blu-Ray comes out there will be more on there as well.

Pearl Jam is one of the greatest rock bands ever, and the documentary about them is decent and worth seeing. I just feel like not everything was focused on and could have been better.

Bob Marley and The Golden Age of Reggae