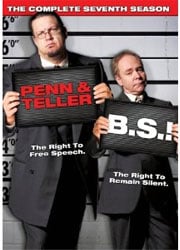 The latest season of Penn & Teller’s Bullshit is both entertaining and informative, which is pretty much the case with every season. I’m surprised the show has been going on this long but there’s just so much bullshit out there yet to be featured on the show. If you enjoyed the other seasons, you’ll like this one too! Only problem with this DVD release is it’s missing the infamous Vatican episode!

Penn & Teller this season explore a variety of topics, and totally rip them apart. The season opener is orgasms. Yes, they went there. I think it’s just an excuse for the guys to parade a bunch of naked people around on the show and showing their O Faces. The episode is really about Penn & Teller furious over people taking advantage of normal people who want to achieve better orgasms & last longer. So people have “developed” techniques, tips, sex classes (a.k.a. orgies) and charge people a lot money for it. It’s an amusing episode that’s for sure. The rest of the first half of the season was equally as strong. The episodes on the first disc include astrology, violent video games, The Apocalypse and lie detectors. The second disc has the episodes on organic food, taxes, lawns (random), and stress. The only episode NOT included on the DVD (for whatever reason) is about the Vatican. Not sure why Showtime felt the need to censor and completely remove this episode from the season. I haven’t seen the episode but know I would definitely like it. Whenever someone attacks religion, I’m a happy camper! But other than that, this season has many strong topics.

Penn & Teller were amazed that they never covered astrology after all these years. Me too, I swore they covered it before. I thought that was one of the best episodes of the season since I can’t stand astrology. Think it’s just a bunch of meaningless shit and a bunch of hocus pocus. Oh no, I sound crabby so it must be because I’m a Cancer. Shut up hippie! But anyway, Penn & Teller pretty much say the same thing. The violent video games episode was really good as well. They show that video games don’t always lead to violence. How do they show it? Well, they let a young video gamer shoot a rifle with a trained soldier at a shooting range. The result isn’t that surprising to me but the kid ends up not liking it and ends up crying next to his Mom. Its episodes like that makes me want to show these to all the politicians and religious nut jobs trying to censor video games. Most kids know reality vs. video games. At least I think so. It’s up to the parents to discuss that with the kids before they play video games. Of course they could always read a book too. That doesn’t hurt.

The second disc has some good episodes as well but I don’t think its as good as the first half. Organic foods episode was really interesting. In a nut shell, they say that organic foods have just as much pesticides as normal food. They did a test with people in a farmer’s market to see if they can pick out organic vs normal fruits & vegetables. Most of the time, people picked the normal foods over organic. The episode features actor Ethan Embry’s hippie musician brother and his wife. The taxes episode was fitting for what’s been going on lately, and the lawn episode just seemed totally random. But I guess people care about their lawns. The final episode on the DVD is the stress episode. It has some interesting points in the episode but I don’t know if I agree with everything P&T said in the episode. But that’s the case with most of these episodes, you agree with them sometimes, and then you disagree with them for the other time. At least they make it entertaining and funny that their points of views don’t scare you away if you there is an episode that you don’t agree with.

I absolutely love when Penn & Teller Bullshit comes out on DVD because I don’t have Showtime. It’s the same thing when Californication comes out on DVD. You can find 2 episodes of Californication’s third season as bonus material on this DVD. But I’d rather just wait until I get the full DVD. It would feel like a tease to me. Anyway, if you feel that strongly about the Vatican episode being left out, then not sure what to tell you but the rest of the season is excellent. Perhaps Showtime will listen to the complaints and put the Vatican episode on the next season DVD? People can just google the Vatican episode and watch it online anyway, so what’s the point of leaving it off a DVD? 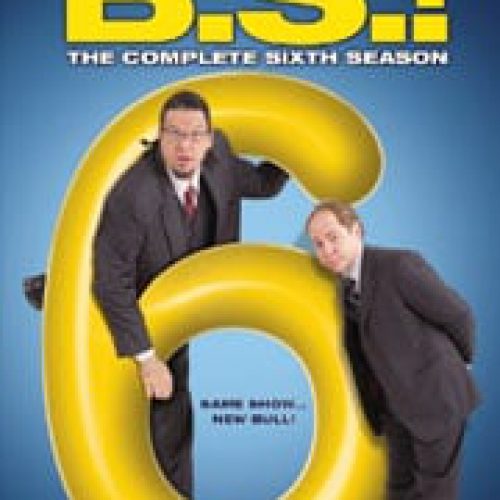