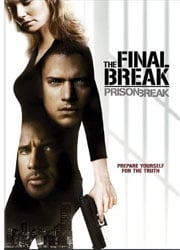 For people who didn’t find satisfaction with the Prison Break finale will really like this final movie called “The Final Break.” It answers questions as to what happen to everyone on the series right after they are granted freedom. This is only an hour and half but it’s worth watching if you enjoyed Prison Break as much as me.

Prison Break: The Final Break starts off with Michael & Sara’s wedding only to be interrupted by the police. How very Pirates of the Caribbean 2. Sara killed Michael’s mother Christina Scofield and now there’s a load of evidence that she killed some random lady. I guess she hid her true identity? So Sara is off to prison and not just to jail because the jails are over-crowded. So while waiting for her trial, she’s in prison and quickly makes enemies with both the inmates and the guards. Meanwhile, The General and T-Bag are in a nearby prison and get wind that Sara is there. The General puts up a hit on her and everyone tries to make several attempts on Sara’s life. Michael gets news of this and decides he needs to break her out. He recruits Lincoln, Sucre and Mahone to help break her out before she’s killed.

This final 2 hours of Prison Break is like a Skin-a-max female prison movie except no one gets nude. What’s up with that!? Seriously, this was the female side of things when it comes to prisons. It felt like we’ve been here before, a few times actually. Everything that happened in this happened to Michael and the other guys in the show. This time it was Sara’s turn. It almost could have been the pilot to that Cherry Hills spin-off that was originally planned but never panned out. It was cool to see most of the cast back again, but after awhile it just feels like we’ve done this over and over. The series definitely used every twist and turns you can think of. There’s a few more used in The Final Break including the fate of Michael. I wasn’t thinking he died one way, but it ended up being from another way. I liked seeing how everything developed instead of just assume what really happened. In the end, this is why this was made. Just to give fans more closure on the series and think the Final Break movie does that.

The only extras included on this DVD are 2 deleted scenes. One is extra footage of the FBI agent trying to stop Michael and the other is Mahone talking with his ex-wife. If you like Prison Break, definitely watch the final 2 hours of the series with this DVD. While it feels like it’s “same old, same old,” it’s still worth watching.