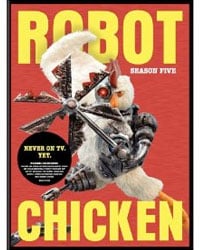 The fifth season of Robot Chicken is out on DVD on Blu-Ray and just like the previous seasons, the skits are hit or miss. But the one bonus is that the episodes are uncensored!

For those that don’t know, Robot Chicken is a stop motion, geeky/pop culture referenced show that is only 11 minutes or so. They use claymation, toys and action figures for the animation. It airs on Adult Swim and was created by Seth Green and Matthew Senreich. Each episode has spoofs on Star Wars, Star Trek, Lord of the Rings, He-Man, Transformers and other geek TV/movie things that some people might get, some may not. Depends on how vast your knowledge of geeky things are. There are a lot of references to 80s commercials, TV shows and movies. There are so many sketches that it’s hard to describe them. There’s also a countless amount of celebrities that lend their voice to the show as well but it’s practically impossible to list them all.

I don’t catch Robot Chicken on TV anymore but honestly, watching it on DVD or Blu-Ray is far better just because of the uncensored audio. The show has so many curses that it’s practically annoying watching it censored on TV. This is definitely the way to go. There are a lot of funny moments on the show, some jokes fall flat, and some I just don’t get at all.

Robot Chicken is definitely a show made for and by people with ADD. The jokes are quick, things flash & happen really fast, and things are sometimes loud and obnoxious. Actually, most of the girl characters are the worse and really loud. It sounds like Seth Green or others doing the voices as the girls and it just comes across as annoying. If you listen to the show and don’t actually watch it, which I’ve done at times, it will give you a headache haha. But other than, I had no complaints with the season.

Robot Chicken Season 5 is worth owning if you want to hear the show uncensored. I can’t stand the bleeps so I think this is worth getting, especially on Blu-Ray.