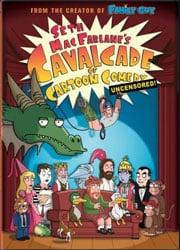 Seth MacFarlane is one of the busiest guys in showbiz these days. Whether or not you like him or not, he’s sticking around for awhile. His latest non-Family Guy venture is Cavalcade of Cartoon Comedy, which was posted on YouTube and Sethcomedy.com last Fall. If you love Family Guy’s cutaway clips, you’ll really love this DVD or Blu-Ray! Or maybe not?

The DVD contains an hours’ worth of material, which goes by very quickly considering each animated short doesn’t exceed 3 minutes. I believe there are 50 shorts on here and most are a hit in my opinion, but there are a few misses as well. I think some of these shorts aren’t long enough and suffer with problems that Robot Chicken sometimes does. Just as you start to get into a short, it’s over with. Some skits go way too longer and keep showing up throughout the DVD. The Scotsman watching movies got played out really quickly and it’s essentially the same thing over and over. I did like the “Sex with…” series, which was the same setup, but with different people or things like a tube of toothpaste. I haven’t seen all of the shorts on this disc, but all of them are uncensored and some haven’t been seen until now. My favorite animated shorts included Super Mario Rescues The Princess, The Frog Prince, Backstage with Bob Dylan and Beavers: Assholes of the Forest. The backstage with Bob Dylan was hilarious to me because it had Tom Waits in it, and I’m a huge fan of his. Basically it’s a short featuring people that you can’t understand like Dylan, Waits, Popeye and Muhammad Ali.

The DVD isn’t that expensive but some people might huff n puff about spending money on this and there’s only an hour of material. I’m not sure I would spend money on this if I didn’t get this for review, but I’d definitely rent it. I think this can be put under the category of re-watchable though, because I’ve seen some of these shorts a few times now. They still make me laugh. The only extras you get is a Red Carpet premiere which featured a lot of actors talking about the cartoons, but was pretty pointless to include on the DVD. There are also still galleries but for some reason, I just don’t find that interesting. I’d rather see how things were made instead of drawings. Obviously if you don’t like Family Guy and Seth MacFarlane’s brand of humor, you’re going to really hate this. I’m a fan and thought this was DVD was hysterical (for the most part). I’d rent this before buying.

Bottom Line: Funny animated shorts but not sure this is worth buying or not.
Rating: NR
Running Time: 54 mins
Extras Rating:
Overall Rating: