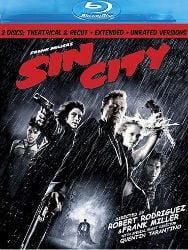 Is there a better way for Sin City fans to celebrate the release on Blu-Ray than to own this two disc set featuring both a Theatrical and Unrated Recut & Extended edition? I don’t think there is, and it’s filled with lovely extras on top of that. Starring Mickey Rourke, Bruce Willis, Clive Owen and an all star cast, in which they help bring Frank Miller’s graphic novels to life on the big screen from Robert Rodriguez, a guest spot by Quentin Tarantino and the creator himself, Frank Miller directing the film. Paving the way for other live action CGI films like 300, and The Spirit, Sin City was about as perfect as you can get to visually seeing a comic book come to life on the big screen.

Sin City is based off of Frank Miller’s graphic novel of the same name. The movie is split up into 4 or 5 different storylines and follows around different characters in Sin City. You have an old cop Hartigan (Bruce willis) who vows to save a sexy stripper (Jessica Alba), then there’s a story about Marv (Micky Rourke), an outcast tough guy wanting revenge for his one true love, a hooker. That storyline was my favorite by the way. Also, there’s the story of the red converse wearing Dwight (Clive Owen) who fights some guy who likes to bully woman, & cause ruckus and Dwight gets the help from the Old Town girls. The film opens with a short story from Josh Hartnett, which was actually used to sell the movie to Frank Miller. It doesn’t really have anything to do with the story but it gives you a nice intro to what to expect from the movie.

This blu-ray edition is the preferred way to watch Sin City due to it being in black and white for the most part. The film really shows the clarity, crispness and depth in each frame. Visually stunning, and it helps create the movie theater experience if you watch the film in the dark. The contrast colors that come through such as the Yellow Bastard and the woman in red really jump out at you during a black and white film for the most part. The sound comes across very clear as well in DTS-HD MA 5.1 The menus feature scene selections and access to several audio commentaries including a recording of the Austin Audience Reaction which features a bunch of fans screaming and hollering while watching the film during the exciting moments.

On disc two of the extras features the film Recut, Extended and unrated so you get to see both versions of the film for this blu-ray set. On top of that you get some excellent behind the scenes features including a look at Quentin Tarantino’s guest spot in the directing chair as well as cast and crew interviews. If you are fan of the guns and props of the film, than you should check out “Booze, Broads and Guns” featurette, which details how the crew went about re-creating the weapons and props featured in the Frank Miller graphic novels. Also, Robert Rodriguez takes the fans and viewers deeper with a look at his features for the set which are a brief film school, and how they shoot the actors all in green screen.

Sin City led the way for other films to come out and showcase how Comic Books should come to life on film, and this film excelled at that. The way the dialogue was spoken and the monologues as well, it just felt like a graphic novel. The cut scenes and the cartoon-y running, driving and other things like shooting certainly felt more like a graphic novel than a film and that is what makes this film interesting and exciting. Perhaps some day a sequel to Sin City will be released but at least we get to enjoy this one for now.