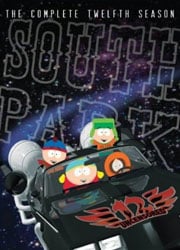 The 12th season of South Park is available on DVD and Blu-Ray this Tuesday. This is the first time it’s available on Blu-Ray so I’m sure the show looks great in high definition. You’d think Comedy Central would have an HD station at this point. Anyway, this season is an excellent one, but what’s even cooler? There are actually bonus features on this DVD besides the usual mini-commentary.

South Park’s 12th season starts off with Eric Cartman mistakenly getting the AIDS virus in a Hospital. He then tries to get everyone to pity him and ends up throwing himself a benefit concert. He then goes to great lengths to infect Kyle with the virus so he can suffer with him. The next episode is a great view on the whole Britney/Media situation. Instead of acting Britney as a dirty skank whore, they show us how she must been feeling and attacks the media and people that treat her like an animal. It’s an interesting point of view, and a funny one at that. I still think she’s a mental case. Other episodes in this season include: Mr Garrison getting his penis back, Canada goes on strike, Kenny gets high on cat urine and trips out “Heavy Metal” style, the Internet shuts down and all hell breaks loose, giant cute guinea pigs attack South Park, Obama and McCain are really working together to steal the “Hope” diamond, South Park elementary turns into high school musical and of course…Indiana Jones gets raped by George Lucas and Steven Spielberg. Yes, you read that correctly.

When I originally watched this season on TV, I didn’t find it as funny as the previous season. But I changed my mind when I watched this again on DVD. I found that many of the episodes were excellent and quite funny. One of my favorite episodes of the season was the giant guinea pigs that attack South Park. I love how it’s a spoof on Cloverfield and love how much Randy Marsh is over-dramatic and annoyingly using the camera all the time. Plus the giant guinea pigs were so damn cute that they made me giggle like a baby. If you see the episodes, you’ll know what I’m talking about. What’s even funnier than all of that is that the guinea pigs weren’t even doing anything besides standing there and looking cute. Yet everyone is running around and screaming. Other notable episodes that I liked were the Aids episode, the Over Logging episode, The China Problem episode and Elementary School Musical episode. The most talked about episode of the season has to be the Indiana Jones rape scene. That video was posted all over the internet the next day. People thought Matt and Trey went too far but I didn’t think so. Indiana Jones and the Kingdom of the Crystal Skulls sucked major ass and they deserved to be shit on. I could relate to the Over Logging episode in that I would be freakin’ out if I didn’t have Internet. No, I wouldn’t be losing my mind over lack of porn. Each season Randy has some classic episodes and this was one of them.

This season’s DVD (and Blu-Ray) has a few bonus features like: the usual mini-commentary by Matt and Trey, Six Day To South Park: A Day-By-Day Making Of South Park, behind the scenes of “Major Boobage” and a behind the scenes look at how “About Last Night” was made. They must have been listening to complaints of lack of extras on each season because this time there’s plenty to watch! The mini-commentary is always something I listen to because Matt and Trey always have funny things to say about the episodes. Plus it’s only a few minutes so I can still get into the episode after hearing them. The Major Boobage featurette was cool because it showed you how the “Heavy Metal” style animation was created. Matt and Trey said on the commentary they had to hire outside help for that episode. The Day-by-Day featurette was audio commentary over sketches, storyboards and actual episode scenes. It was cool to see how the storyboards were and then how the real scenes were. The behind the scenes featurette was basically audio commentary over that episode with a few storyboards put in there as well. The producers, writers, etc. ended up doing the commentary on the featurettes instead of Matt and Trey. If you get a chance to watch that stuff, be sure to do so.

South Park Season 12 is a funny season and on par with last season. In terms of DVD extras, Season 12 blows Season 11 out of the water. Perhaps they added some extras on this set to put on the Blu-Ray set? The DVD set is presented in full screen but the Blu-Ray set is presented in high-def widescreen so obviously get that if you can. Season 13 starts back up this week!

Bottom Line: One of the best DVD sets to date! If you got Blu-Ray, be sure to get the set on that.
Rating: NR
Running Time: 308 mins
Extras Rating:
Overall Rating: