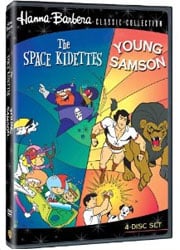 Warner Bros continues releasing their archive of classic Hanna-Barbera cartoons, this time splitting a set between the Space Kidettes and Young Samson (also known as young Samson & Goliath). Animation & Hanna-Barbara fanatics will appreciate this one.


I’m not entirely sure if these two cartoons aired this way or if they had their own shows. I think in later on in syndication, the two cartoons aired together. In this case, each episode on the DVD is split up between the Space Kidettes and then Young Samson. The Space Kidettes is about a group of space cadets, Scooter, Jenny, Snoopy and Countdown. Don’t forget their puppy Pupstar! Each episode they fly around space and protect it from bumbling space pirate Captain Skyhook and his sidekick Static. Young Samson is about teen scooter riding boy who has magical bracelets. When he needs to, Samson turns into big buff superhero who needs to put paints on. Coming along on his adventures against mad scientists, is his dog Goliath, who conveniently turns into a big lion. I don’t know why these cartoons are grouped together except they both have a trusty sidekick dog.

Many of these Hanna-Barbera cartoons are ones I used to watch as a kid, but really don’t really remember too much from the series. They weren’t on that much to have vivid memories of it so it was nice to finally get to see the cartoons again. The animation is decent for the time, better than other Hanna-Barbera cartoons like Wheelie and the Chopper Bunch. Young Samson’s animation was better, and had a Johnny Quest feel to it. One thing I didn’t like about the episodes is the theme music and intro are practically played twice. Start of the credits and at the end as well, it’s like seeing the same on repeat.

Space Kidettes is cute and really aimed for children that haven’t left the house for school yet. Young Samson is more up my alley since its more of a teen cartoon like Johnny Quest, Space Ghost and Herculoids. ‘60s Hanna-Barbera cartoons are classic and worth owning if you’re a big-time fanatic. The quality of these episodes isn’t the best, and DVD (MOD) might not work on your computer or certain devices. Watch the trailers for the shows and see if you want to buy this.