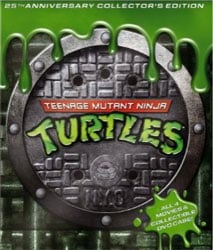 The first turtle movie is Teenage Mutant Ninja Turtles which came out in 1990 and was a big hit. I’ve seen this movie so many times over the years; it’s a little sickening to watch now. I haven’t seen the first film in many years though. The film is about New York City being taken over by a mysterious gang called the Foot Clan. 4 new vigilantes come out of nowhere to stop them. They happen to be Leonardo, Raphael, Michaelangelo, and Donatello; 4 large ninja turtles ready to kick some serious butt dude! They are lead by Master ninja rat, Splinter. Go with it people, go with it. They find out Shredder is behind the foot clan, and that he’s the one that killed Splinter’s master in Japan. Helping the turtles out is April O’Neil, a reporter at the local cable station and an ex-hockey player named Casey Jones.

The second film, Shredder miraculously survives being crushed in a garbage truck (yeah right) and he wants revenge. Shredder learns how the turtles were mutated and develops 2 creatures to battle them. In the end, the turtles win against Tokka, Rahzar and Shredder at a Vanilla Ice concert. Go Ninja Go Ninja…Go! For the sequel, kung fu TV actor Ernie Reyes, Jr. helps out the turtles and April O’Neil was replaced with a hotter, far less annoying actress.

After that, are Teenage Mutant Ninja Turtles III and TMNT. I didn’t see those films and not sure I want to see the third movie at all. They are stuck in time, and it just seems geared directly at kids and all the dark stuff is gone. I heard TMNT the animated movie was decent but I’ll eventually see it. I mainly like this set for the first two movies, which were the best in my opinion. They are very outdated, and cringe-worthy at times. There are some things I still like though and some things that still make me giggle. Things like Casey Jones saying oops as he’s crushing Shredder in the garbage truck, or Casey Jones making fun of Master Tatsu. The turtles have some funny things in the movies, but I always liked Casey Jones stuff. I always loved the part where he shows up in the antique shop to join the turtles in a fight. The first film had the best action out of all the movies, because they actually USED their weapons. The later films they toned down the violence so kids don’t stab their parents with sais or swords. Hey, serves the parents right for buying their kids weapons in the first place! The second film has its moments, including the iconic Vanilla Ice rap scene but isn’t as good as the first film.

If you never owned any of the TMNT movies, now’s a good time to own them. Even if the sequels aren’t as good as the original film; it’s still worth owning. And hey, who doesn’t want to own some temporary tattoos and turtle masks as well! I know I put them on as soon as I got them. And I’m not lying either.

Bottom Line: Decent movie set that include things for the kids (or adults). But there aren’t any extras which just sucks!
Running Time: 3641 mins
Rating: PG
Extras Rating:
Overall Rating: