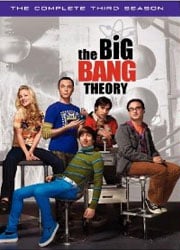 BAZINGA! I’ve never seen one episode of The Big Bang Theory until this summer while on vacation. After that, the show has quickly become one of my favorite comedies. The Third Season of the hit CBS show is just as good as the previous 2 seasons!

The Big Bang Theory is set in Pasadena, California and is about 2 Caltech geniuses who are friends and roommates, Dr Sheldon Cooper (Jim Parsons) and Dr Leonard Hofstadter (Johnny Galecki). Sheldon is a theoretical physicist, a genius who is practically asexual. He’s like a robot pretty much. Leonard is experimental physicist and is in love with the next door neighbor Penny (Kaley Cuoco). She’s a pretty waitress and an aspiring actress from Nebraska. Rounding out the gang is Howard (Simon Helberg), a horn dog aerospace engineer and Raj, an Indian particle astrophysicist who can’t speak in front of woman. The 4 guys are socially awkward and lack common sense in certain areas like woman but obviously are geeks for everything ranging from comics to Star Trek.

The end of the second season, the guys were sent out to the North Pole for a few months to study something. Penny was last seen wishing Leonard wasn’t going away but she didn’t reveal her feelings for him. The third season starts off with the group coming back from the North Pole and are really hairy. Leonard stops by Penny’s and she finally just plants a kiss on him. After 2 seasons of sexual tension between the two, they finally become a couple, for at least a little awhile. This season introduces another nemesis of Sheldon’s, actor Wil Wheaton from Star Trek and Stand By Me. Wheaton lives in the area and is a friend of the comic shop guy and he just keeps popping up and foiling plans of Sheldon’s. Howard also finally scores a girlfriend as well, for again, at least a little while.

The third season also includes episodes: Howard and Raj go to a goth club, Raj begins to work for/with Sheldon so he doesn’t get deported, Leonard tries to learn football to fit in with Penny’s friends, Leonard, Raj, and Howard mistakenly get high on a camping trip, Sheldon tries to teach Penny physics, Leonard’s mom visits again, Sheldon and Leonard’s apartment is broken into and that freaks out Sheldon. Towards the end of the season, Sheldon freaks out Stan Lee and gets a restraining order, Sheldon is terrified to give public speeches and the final result is quite amusing, and the group find The One Ring from a garage sale and find out it’s a prop from the movie so they all freak out and want it for themselves. All in all, one funny season of Big Bang Theory.

I was dying to watch season 3 as quick as possible since I wanted to catch up to Season 4. I wish this was released a little earlier for fans to catch up and have a gracious time of catching up on the show if they missed it. This season was just as hilarious as the previous seasons. I didn’t really want to add yet another show to my already full lineup but there’s no question that I wouldn’t leave Big Bang Theory off that list. It’s practically one of my favorite shows on TV right now. How could I not see this one from the beginning? I guess I have a cynical view towards new shows and just see all the networks canceling them before they hit their prime. But back to the show…

I liked how Leonard and Penny finally became boyfriend and girlfriend. But towards the end of the season things get weird between the two and become awkward for the characters, and the audience as well. I like them either as complete friends with the sexual tension or boyfriend & girlfriend. Having that conflict between them isn’t as fun to watch. What would be more realistic is having Leonard obsess over Penny and she not even caring about him but that wouldn’t make for good television would it? Jim Parsons as Sheldon is the highlight of the show for me. He’s what makes this show hilarious, but the overall cast is really great as well. It’s certainly nice to have Kaley Cuoco on the show for obvious reasons. Been a fan of hers since 8 Simple Rules… Simon Helberg is another funny character on the show, that has funny lines because he’s a nerdy Quagmire in the sense, but only a Quagmire that doesn’t seal the deal. Kunal Nayyar’s character is definitely getting better but I think the not talking when woman are around is getting stale. I think it limits his character and he can’t really interact with Penny when she’s around. But I’m just nitpicking

In the previous seasons, I like Howard’s mom and how much she screams on the show. It’s really hysterical, but felt there wasn’t enough of her (or well her voice) on the show this season. It was nice to see the characters get into relationships a little and see how everyone dealt with that. There’s endless possibilities of what they can do with these characters, since there’s always geeky or nerdy things to show or make fun of. The show is certainly on top of the current trends in technology and pop culture.

The DVD bonus features include a featurette with cast talking about their favorite moments, a set tour with Simon (Howard) and Kunal (Raj) and a gag reel. The featurette where the cast is answering questions from fortune cookies was good. It shows you how well the cast get along with each other, on and off the screen. The set tour was cool just to see how everything is set up. I had a feeling the stairs on the show was just one level and that’s exactly how it is. The gag reel was the usual stuff, but it’s always funny to me seeing them screwing up their lines.

This show is great for geeks, nerds, dorks, and anyone who simply likes to laugh. I get a lot of the jokes that deal with pop culture, but I don’t get the science lingo or jokes. The good thing about this show is you don’t have to know much about science or physics because it’s just a funny show. The way the characters deliver their lines, or the way things happened on the show; there’s no need to feel like you have to be smart to watch this show. I know I’m not smart but enjoy this series tremendously. Give it a shot! Start with Season 1 and you’ll soon find you’re watching as many episodes as you can in a day like me.