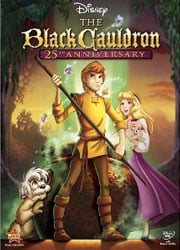 Out of the all the Disney classic animated movies, this was one I never saw or don’t remember seeing. The Black Cauldron came out in 1985 and wasn’t a hit; could be why I never saw it until now? But Disney has decided to release a 25th Anniversary Edition DVD in honor of it’s anniversary. This movie isn’t for everybody, certainly for not all children but someone out there will appreciate this movie on DVD.

The start of the film takes places in a small farm town in the land of Prydain. A young pigkeeper Taran (Grant Bardsley) dreams of becoming a warrior but his ambitions get put to the test when an enchanter’s oracle pig Hen Wen is captured. The pig is captured by the evil lord The Horned King (John Hurt) because he plans on using the pig to lead him to the Black Cauldron. The cauldron has the power of creating an undead army. Taran goes after Hen Wen and gets help along the way from Princess Eilonwy (Susan Sheridan), an aging Bard Fflewddur Fflam (Nigel Hawthorne), and some odd but loyal creature called Gurgi (John Byner). With their help, Taran learns what it’s it like to be a hero and a warrior.

The Black Cauldron wasn’t the most exciting Disney movie and wasn’t the best. It also wasn’t the worst either but I don’t know what to think of it really. I like how the film didn’t feel like a typical Disney movie and how it was dark. The Horned King was a terrifying character and more than likely would have scared me when I was little. But then again, a lot of things did back then. The animation was nice but definitely felt dated. John Hurt’s voice was perfect for The Horned King and added to the creepiness.

If The Black Cauldron was made today, the overall movie could have been done a lot better. The story felt all over the place, and confusing at times. The characters were kind of stale and generic to me, but maybe I’ve just seen a lot of fantasy & Disney films. I found it very funny and distracting at how similar Gollum sounded to Gurgi. It felt like Andy Serkis was voicing the character, but I’m pretty sure he was influenced by that character’s voice done by John Byner. It’s hard to deny how similar those characters speak alike and sound alike.

The special edition DVD has a few things to check out but nothing all that special. There’s an unfinished deleted scene, there’s a few games for kids to play, a still gallery and an added animated short. The animated short was actually my favorite about the features because it featured the Trick or Treat short featuring Donald Duck, his nephews and a helping Witch to the nephews. It’s definitely a Halloween classic!

The movie has it’s moments but in the end, this could have been a lot better. The characters aren’t that interesting, the story is messy but the film looks cool & animated nicely. It’s worth a look if you haven’t seen it before.