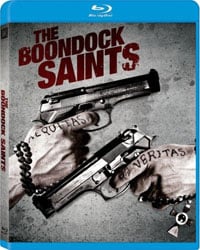 Action packed and a cult favorite, The Boondock Saints is now available for Blu-Ray and I couldn’t be happier. Starring Sean Patrick Flannery and Norman Reedus as Irish twin brothers who go on a vigilante killing spree, who believe they are sent from God to rid the world of all the evil in this world. Hot on their trails is Flamboyant FBI Agent Smecker, played masterfully by Willem Dafoe. Torn between upholding the law, and embracing a moral code of what is right and wrong, The Boondock Saints is a great film that will make people discuss afterwards if what the ‘Saints are doing is correct.

When visited by the local Russian mob in their favorite Irish Bar, the MacManus brothers did not appreciate the fact the mobsters were forcing the bar to be closed. This leads to a big, old fashion bar brawl. The following morning, the brothers are forced to defend themselves as the mob is back for revenge. When things work out in the brother’s favor, they seek a higher mission in life; ridding the world of all the scum and villainy. Along for the ride, is there buddy Rocco (David Della Rocco) who is a low level enforcer trying to work his way into the Italian mob, but is not taken very seriously. Together, The Saints are dubbed after the media find out the mysterious brothers are out killing the mob and for that, they are considered heroes in the press.

The film has been out for nearly ten years, and with this 10 year anniversary, the movie fan base is growing and generating cult status. While Boondock Saints is similar in style to some other action directors out there, Troy Duffy brings a different element to the industry, by asking fans to think about what they have just seen and would you act differently in that scenario? Willem Dafoe’s performance as Agent Smecker is worth it to tune into alone. Agent Smecker is sarcastic, funny and can also be a real jerk to the other cops since he feels no one is on his level of intelligence when it comes to the crimes associated with the Saints.

This Blu Ray edition features both the theatrical and unrated version of the film, while I haven’t seen the film in a few years; I can’t seem to recall the difference besides some added dialogue to scenes. The deleted scenes were great and some of them you wished were kept in the film, especially the one that is only featured for a minute in the opening credits. This scene deals with the MacManus brothers working at their blue collar Meat packing job and dealing with a new employee who hates men. I thought it was great and it’s a shame you can’t hear most the conversation in the film. For the theatrical version of the film, you can listen to audio commentary by Director/Writer Troy Duffy and the other by Billy Connolly which I am sure was a hoot since he’s a very funny comedian. I never listen to the commentaries honestly because it takes away from the film and that’s what I want to watch, the movie.

Big news for The Boondock Saints fans is that Troy Duffy is now in Post-Production on the long awaited sequel to the film, called “All Saints Day.” Now that the film is finished filming, it will be out quicker than getting around and going through legal red-tape to shoot the movie. If you own a Blu-Ray player, this is a must for fans of the movie!