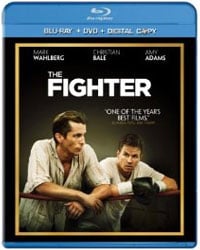 The Fighter is another sports-related movie that was recognized this award season for its acting. It’s another true story of an athlete overcoming a lot and dealing with non-sport issues. It’s a good flick and something to enjoy over a nice lazy weekend.

The movie is based on the true story of boxing brothers Micky Ward (Mark Wahlberg) and Dicky Eklund (Christian Bale) from Lowell, MA. Dicky is a bit of a local legend for taking down Sugar Ray Leonard in a HBO televised fight and Micky has been overshadowed with it. It’s his turn to do something with his struggling boxing career and his brother is his trainer as well. Though, Dicky is becoming more and more unreliable since he’s addicted to crack. While feeling like he’s not cut out for boxing anymore, he starts up a relationship with a bartender Charlene. She encourages Micky to stand up to his troubling family and do things differently in order to succeed. Eventually Micky decides to go with a new manager and trainer, to get serious about getting a title, leaving his family up in arms with that. But family is family, and Micky sticks with Dicky when he starts to clean up his act.

I’m not a boxing fan per say, but I do enjoy watching movies about them. I liked the Rocky movies, Cinderella Man, films like that; now I can include the Fighter in there as well. What makes this movie for me is the performance of Christian Bale, who deservedly won the Oscar for his role. The guy has proven over and over again, just how much research he does or how far he’s willing to go to become the person he’s portraying. He’s done amazing work in The Machinist and Rescue Dawn, so it’s a bit surprising he’s just winning an Oscar now. If you watch behind the scenes videos of the real Dicky, you can see how much Christian acts like him.

The rest of the acting was good as well. I’m not entirely sold on Melissa Leo winning an Oscar though. She was great but I don’t think she had a stand out performance like Bale’s. Mark Wahlberg was perfect as Micky Ward. He’s got the build, he’s from the Boston area with a huge family and is a decent actor as well. For the movie itself, it was a bit slow in some spots but not a lot. It also felt like the story was more about Dicky than Micky, but I guess when you have Christian Bale performing, you want to focus on him more.

The Blu-Ray for the movie looks excellent. No complaints in that department. The special features on the Blu-Ray include audio commentary with director David O. Russell, a behind the scenes featurette The Warrior’s Code: Filming The Fighter, a mini featurette called Keeping the Faith, and a bunch of deleted scenes. The two featurettes were interesting, and has some cool things to see in there. You see that Mark Wahlberg practically trained for 4 years for this role, which is a long ass time. You find out that some of the sisters of Micky and Dicky, or the boxers themselves didn’t like how they were being portrayed in the movie. But those dramatic things is what makes the movie interesting. The deleted scenes were actually really good and added more depth to the characters. Plus, it was just nice to see more scenes with Christian Bale as Dicky.

The Fighter isn’t breaking new ground but it’s still a movie to see at least once. The acting performances is what makes the movie, particularly Christian Bale’s role. I would imagine people will like The Fighter even more if you’re from the Boston area and followed the careers of Micky and Dicky.