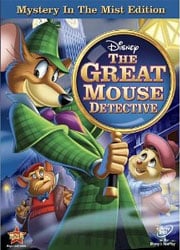 The Great Mouse Detective came out in 1986, and it isn’t always a movie people talk about much. I haven’t seen the movie since the 80s and I wanted to watch this new DVD edition. Just like most Disney movies, there’s something here for the whole family even though things can get dark at times.

The Great Mouse Detective is about Basil of Baker Street (Barrie Ingham), a mouse detective who’s like Sherlock Holmes. The story is set in Victorian London, and begins with a toymaker being kidnapped by a pegged legged bat. The toymaker’s little daughter Olivia (Susanne Pollatschek) searches for help, and gets it with Basil of Baker Street and his trusty assistant Dr Dawson (Val Bettin). Basil and Dawson find out that the evil Professor Ratigan (Vincent Price) is behind the kidnapping and plans on using Olivia’s Father’s skills to assassinate the royal Queen. Just picture everything like a Sherlock Holmes movie, except everyone are mice and you have The Great Mouse Detective!

This Disney animated movie isn’t one that gets talked about all that much. It was in a time where Disney had, not necessarily a bad run, but not a popular run with animated movies. Previously, Black Claudron didn’t do well, but GMD did thankfully do a lot better and Disney animated movies continued to be made. Although, this was the same time period as An American Tale, which did a lot better at the box office. But still, Great Mouse Detective did well enough and was a different Disney movie than in past films. At least I think so. GMD is a bit dark because there just happens to be a big fat cat who would eat characters in the movie when they were bad. It’s a bit grim for youngsters but so are most Disney animated features. I was 8 years old when this came and remember seeing it. I don’t remember it being dark enough for that age. I just don’t remember a whole lot from the movie in general. Certain characters I remember like the bat, and the dog Toby and of course Basil. But that’s as far as my shady mind remembered. Henry Mancini’s score was memorable for me as well.

I think the movie holds up well enough to see in the year 2010. I’m not sure why they are releasing a new DVD now; maybe it’s just time? The DVD is remastered, and has the original title intro from the movie. I don’t think that has been seen since 1986. When reading up about this movie, I was surprised to see that it’s one of the first animated movies to work with computer animation. That scene was during the clock tower scene when Ratigan and Basil are battling it out. That’s a very memorable scene. Another is the scene in the bar with the burlesque dancing. It seemed harmless back then but I’m sure parents would be up in arms if there was burleseque dancing in a Disney movie today. How dare my children see dancing mice wearing lingerie! haha.

The new DVD contains the original DVD extras, as well as some new things. There’s a “So You Think You Can Sleuth” Game, a sing-along song (ugh), and some other fluff. Honestly, the extras were a bit disappointing after the original ones. For a new DVD edition, they could have been a lot better!

All in all, Great Mouse Detective is an entertaining Disney animated featured that both adults and children will enjoy. It’s an underrated movie that deserves more attention!

Features:
New “So You Think You Can Sleuth” Game
The Making Of The Great Mouse Detective
“The World’s Greatest Criminal Mind” Sing-Along Song
Dylan & Cole Sprouse: Blu-ray Is Suite!
Learn How To Take Your Favorite Movies On The Go