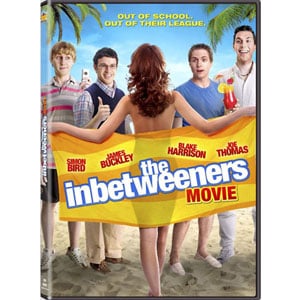 The Inbetweeners was a popular & funny British TV series that I just got into this summer. The movie is a sequel to the TV series in a way, and should please fans of the series that are looking for more awkwardness from Will, Simon, Neil and Jay.


School is over and the socially awkward Will, Simon, Neil and Jay are looking to get away for a holiday. They end up going to a Greek isle where they are end up staying in a “luxurious” 2 stars hotel and try to find some girls that are “really fit.” That’s pretty much all you need to know about the movie.

The Inbetweeners TV series was hilarious and I thought it got funnier as the seasons went along. I thought Season 3 was the funniest and had some great gags. The movie felt like something was missing but I’m not sure what exactly that is. I kind of missed Mr. Gilbert (Greg Davies) throughout the movie because he was always hilarious as the head of the Sixth Form (whatever the hell that is). He’s in one scene in this movie but he definitely steals the scene he’s in. I always thought out of the group, Simon Bird (Will) and Blake Harrison (Neil) were the funniest. James Buckley’s character, Jay, has always been over the top obnoxious and annoying to me. I guess there needs to be one in every group though.

The story for the movie could have been a little bit better than just 4 guys going on a holiday and trying to get laid. You’ve seen that type of storyline so many times before, but thankfully The Inbetweeners is a little bit better than the usual stuff. I’m thinking they should have went on an American holiday to someone abnormal like the NJ shore or something, at least then they could have made the movie more appealing to American audiences. That way, we don’t have to sit through the shit that is the US version of the Inbetweeners.

Unfortunately, there is no Blu-Ray since UK movies and TV series don’t even know what it is I guess. The DVD actually has a lot of great content like commentary with the actors, an hour long Making Of featurette, deleted scenes, bloopers and some other things. Definitely a bunch of stuff to watch after seeing the movie.

The Inbetweeners doesn’t break new ground with its story ideas but it’s a nice follow-up to the TV series. I didn’t laugh at the movie as much as I did for the TV series, but I still enjoyed seeing these guys being awkward and getting into trouble again. I’m looking forward to a sequel to this if there is one.

Bottom Line: Not as funny as the TV series but still worth watching if you enjoyed The Inbetweeners
Running Time: 96 mins
Rating: R
Extras Rating:
Overall Rating: