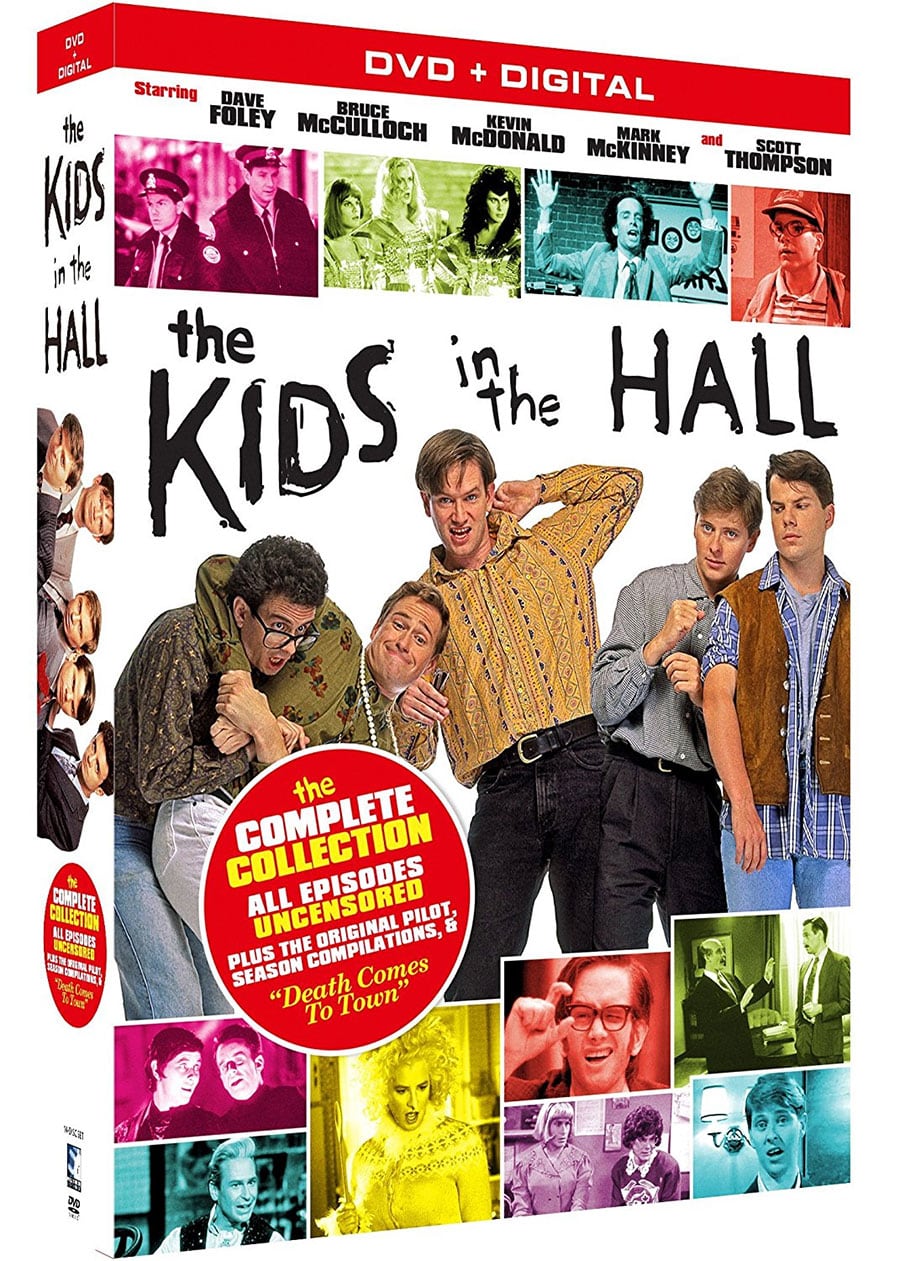 One of the greatest comedy shows is back on DVD, plus this time you can watch them online. After all these years, the show is still quirky and funny as ever.

For people who might not know what Kids In The Hall is, it was a comedy sketch show from Canada, produced by Lorne Michaels (SNL). It aired from 1989 to 1995 on CBC and HBO (later years was CBS). 5 seasons in total, with a buttload of sketches ranging from Buddy Cole, the head crusher, the annoying chicken lady and many more. Some sketches were hilarious, some were clever, some were annoying and some were just bizarre and weird. It was very Monty Python-ish since all 5 guys would dress up like woman and were just as weird as Monty Python. The show has also spawned live tours, a full length feature movie Brain Candy and a reunion show called Death Comes To Town.

It’s been probably been over 10 years or so since watching Kids in the Hall. I used to watch Kids in the Hall all the time towards the end of their run on CBS, and then all the repeats on Comedy Central. I saw the KITH live show in NYC in 2000 when they performed here and it was great! I had some of the season box sets on DVD and reviewed them when they were released on that. Unfortunately, the show hasn’t made its debut to Blu-Ray or digital HD yet. BUT you can watch the show on digital though, which was one of the reasons why I wanted to check out this box set. As of right now, I can only watch the episodes if I go through Mill Creek’s website and Chromecast that video. Mill Creek doesn’t have an app and this isn’t part of UV or Movies Anywhere which is kind of disappointing. I just wish companies would stop grabbing their ball and going home to their own platforms and just pick the 1 thing everyone uses. Still, having the episodes available on the website and all the seasons together on DVD is great, especially for the price.

I always loved the first season the best. Some of my favorite sketches include Bruce singing “Daves I Know” and “Terriers,” the head crusher guy, the editors changing everything around in the street, the black & white classic sketch where Bruce McCulloch is chasing down his pen someone stole, the “Nobody likes us” guys and of course Buddy Cole. There’s just so many sketches to pick from that were the standouts.

The DVD set itself is kind of a pain and lazy. There’s this piece of cardboard that sit on top the discs. You can pull out the seasons’ discs that are on this cardboard slits, back to back. No plastic or making things easier to access the seasons. I don’t know why companies do this kind of stuff with the discs because they can get scratch so easily. Fox does this all the time with The Simpsons sets. The DVD quality isn’t the greatest either but not sure if I’m just used to Blu-Ray or not. You’d think with this being 3rd or 4th reissue of the show, the quality would improve. The extras that are included on this set include the original pilot, some commentary, and other featurettes that have been on other box sets in the past. The DVD menu has a play all feature but when you get to each individual episode, there’s no play button. You have to click on the sketch text to start an episode.

The Kids in the Hall is a great and weird comedy series. The earlier seasons were the best in my opinion but there’s some gems in the later ones as well. The DVD is worth buying if you haven’t bought KITH yet. Plus, the show is available digitally on Mill Creek’s website and is uncensored too. Maybe these will port to Vudu and other services in the future if somehow Mill Creek can get them on there. I think having the episodes just limited to their website is disappointing. Now if you’ll excuse me, the head crusher has his sights on me and I must leave.

Bottom Line: Excellent show and worth buying if you don’t own the series yet on DVD
Running Time: 2700 mins
Rating: NR
Extras Rating:
Overall Rating: