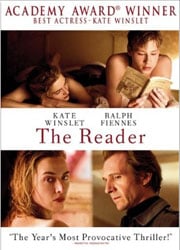 The Reader is the movie that finally gave Kate Winslet an Academy Award for Best Actress. She’s been nominated a few times but finally won for her portrayal of Hanna Schmitz in the Reader. The movie is a compelling drama with excellent acting but I think it drags towards the end.

The film centers around Michael Berg (Ralph Fiennes/David Kross), a German lawyer who had an affair with an older women back in the 1950s. That woman was Hanna Schmitz (Kate Winslet), who makes Michael, read to her after doing their “business.” After the affair, she disappears because of a promotion at her Tram company. She doesn’t leave a trace behind and doesn’t say goodbye to Michael. Years later, Hanna turns up again. Only this time she’s one of the defendants in a war crimes trial for when she was working as a guard at a concentration camp. Michael witnesses the war crimes trial because he’s in law school, but he knows a secret that Hanna isn’t telling anyone. It could help her out in the trial, but Michael wonders what he should do with this information.

I thought the movie was really good despite it being slow paced. The acting was really good, and the story was intriguing. The last half of the film was really slow, and took forever to conclude but I still felt The Reader was a good film. If you don’t like nudity, the Reader will not be your movie then. The first half of the movie is Kate Winslet and David Kross buck naked and having sex a lot. It must have been very awkward to do those scenes, especially when David Kross had to wait to be 18 to film the sex scenes. He plays a 15 year old boy in the movie, so I guess it could have been more awkward if that was in real life and he was 15. Fun for the boy, bad for the woman. I’m sure every teen fantasized about being with an older woman, just not a Nazi older woman. Talk about a mood killer. The second half isn’t boring at all; in fact I really enjoyed the scenes at the trial. If they had just the war crimes trial part, I would have liked The Reader just as much. I’m a sucker for a good courtroom drama I suppose.

There’s a lot of stuff to watch in the special features section of the DVD. There are quite a few deleted scenes, a few featurettes, and a trailer. I enjoyed watching the “Adapting A Timeless Masterpiece: Making The Reader” and “A New Voice: A Look At Composer Nico Muhly.” The Nico Muhly featurette was interesting because we find out that he’s a college graduate and probably one of the youngest composers out there (it seems). He composed a Philip Glass-like score, filled with soft piano playing that added a lot of dramatic tension to the movie. Each featurette shows us various interviews with the director, writer, actors, composer, etc. The deleted scenes add more depth to the characters, but with the movie already feeling like a 4 hour movie; I can see why they were cut.

The Reader feels like an Oscar movie, and rightly so; it won some awards like Kate Winslet winning Best Actress. But if slow-paced dramas don’t appeal to you, you might not like this film. It’s a deep film focusing on two characters and it’s a film I liked. I’m not sure I’ll watch it again anytime soon, but this is worth owning if you like this sort of thing. The Reader is also available on Blu-Ray as well.