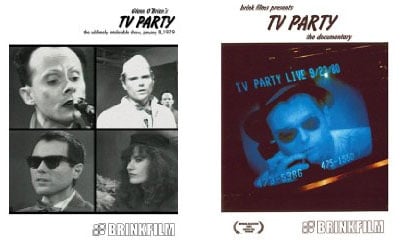 TV Party was a NYC cable access TV Show, hosted by Glenn O’Brien. It ran from 1978 to 1982, which I’m surprised it lasted that long. The show was co-hosted by Chris Stein, who was also in Blondie. TV Party was different than anything you’ve ever seen on TV at the time. I believe the term clusterfuck is the right adjective to describe TV Party.

The first DVD I watched was The Sublimely Intolerable Show, which aired January 8, 1979. So I was roughly 1 and half years old when this aired. The first 5-10 minutes was nothing but technical difficulties. During most of that, the show was airing but you couldn’t hear a damn thing. It’s kind of silly to release something like that on DVD, but then again; you don’t get shows like this anymore. Pure utter chaos. Then viewers get to sit through cringe worthy performances by Compton Maddox, Klaus Nomi and Andy Shernoff of The Dictators. Andy Shernoff’s performance wasn’t as bad as the other performances though. I did like the discussion about why white people like reggae. It’s interesting to hear what they original thought back then about reggae. As the show went on, it got better and more interesting. But if you ever wanted to watch a bunch of people on drugs on TV, than look no further than this obscure NYC cable access TV show called TV Party.

The documentary was a lot more interesting. It’s an hour and half movie about everything you need to know about the local access show TV Party. There are lots of interviews with host Glenn O’Brien, Debbie Harry, Fab 5 Freddy (remember him?) and lots of other people involved with the show or who have appeared on the show. I liked that TV Party included lots of discussions about punk, reggae, politics, rebelling, and stuff like that. I’m not sure how seriously people took them back then, when they are doing drugs on live TV, and acting/singing like a bunch of buffoons. This show was very unwatchable to me but I did think it was interesting as a music fan’s perspective. You get to see weird performances by the likes of David Byrne, Debbie Harry, Mick Jones and get unpredictable calls from random people. That was probably favorite part of the documentary; hearing all the extremely harsh, racist, and homophobic comments from callers. It was still amusing to me and was laughing at a lot of them. I always wondered if it was really their friends just messing with them on live TV. I know that’s something I would have done.

If you want to get any DVDs from TV Party, I’d suggest the documentary DVD. It’s not only interesting, but it has a lot of the best bits in the documentary. So you don’t have to suffer sitting through chaotic nonsense on other DVDs. But hey, some people might like that I guess. I know I had to fast forward a lot of the show. I’m not sure who would actually be interested in this DVD series though. Rock n Roll fans, music historians, or people that actually remember seeing these when they originally aired? If this sounds like something you’d like, then be sure to get this from Brink Film.