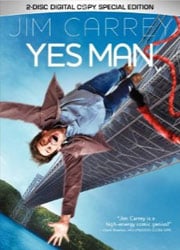 I’m a Jim Carrey fan but lately I haven’t really liked what he’s done. Those movies include Fun with Dick and Jane, Horton Hears a Who, and Number 23. I guess I can include Yes Man in that batch of movies as well. The movie isn’t bad; it’s just different and not as funny as I thought it was going to be.

Yes Man is about banker Carl (Jim Carrey) who turns down loans, doesn’t want to hang with friends, and just wants to mop around his apartment and watch DVDs. He just got out of a divorce and is just a mess. One day outside his job, he meets up with an old friend who became a changed man after going to a “YES!” Seminar. Carl reluctantly goes to that seminar, but in the end; comes out a believer. Instead of saying no to everything, he says yes to absolutely everything! It changes his way of thinking, and results in him meeting an eccentric girl named Allison (Zooey Deschanel). Everything begins to turn out great for Carl, but then while on an impulse vacation to Nebraska, they get stopped by Police. Allison finds out why Carl is so spontaneous and then he has to fix everything up after that. Oh no! Wonder what’s going to happen!?

I felt the movie had its moments but could have been better in areas. It also could have been a lot funnier; it certainly looked like it was going to be funny based on the trailers. It looked like it was going to be a typical Jim Carrey movie where he acts all zany and whacky (ie. Liar Liar), but he didn’t really do that. I think that’s a good thing and a change for Carrey, but felt the overall movie was just weird. It’s based on a true story, so there had to be some light drama in there. But as I was watching the film, I only laughed in a few parts. I thought Zooey was great opposite Jim Carrey, and is always the cutie on screen. The secondary roles played by John Michael Higgins and Rhys Darby were really funny as well. I thought Rhys Darby stole the movie in scenes. I laughed at all the obscure costume parties he also held (Harry Potter, 300). Bradley Cooper finally didn’t play a dick in a movie so that was a welcomed change to see. Jim Carrey played the part well; I just thought the jokes & movie could have been better.

Yes Man is hard to describe, and not sure I would recommend buying the DVD. The DVD special features include a few featurettes. There are a few music videos from Munchausen by Proxy featuring Zooey, and some quick featurettes. Plus a gag reel which is always fun to watch, especially when Jim Carrey is involved. I’m still on the fence with Yes Man; I know, I should just say YES! I just think I need to see it again to see whether or not I really liked it, or really hated it. I think right now I’m in the middle.