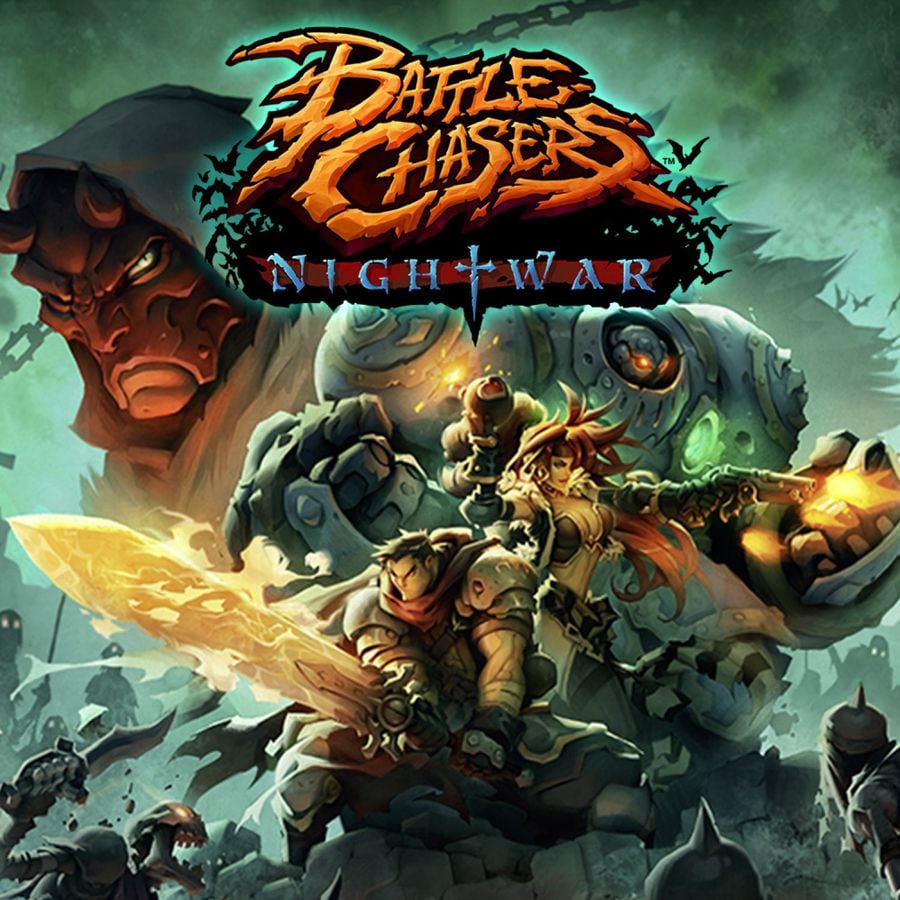 “Battle Chasers: Nightwar” is an action RPG game based off of the cult classic comic series “Battle Chasers” from the 90s created by Joe Madureira. If you weren’t collecting comic books that Joe Mad worked on in the 90s such as Uncanny X-Men and Battle Chasers, you might recognize his name or art style from the “Darksiders” video game series in which he also helped create.

The game is pretty much a Joe Madureria comic book combined with a Dungeons and Dragons Monster Manual and a turn-based RPG come to life. His art style permeates throughout every aspect of the game…whether it’s the cut scenes, the loading screens or the in-game world and turn-based combat itself…it looks absolutely stunning every step of the way.

In “Battle Chasers: Nightwar” you play as a select few of the characters from the “Battle Chasers” comics as you are attacked and crash on a mysterious island full of danger and angry NPCs. There are plenty of elements present from modern video games such as the “Final Fantasy” series, as well as some elements of dungeon crawlers like “Diablo” and “Torchlight”. There is some level grinding (as with most turn-based RPGs for some reason), lots of inventory management and some backtracking required at times but overall the feel of the game is very fluid. When you add in the somewhat interactive overworld map and the randomly generated dungeon layouts and unique designs of levels, enemies and customization available, it won’t feel like much of a grind at all.

In combat, your main focus is on building up Overcharge which allows you to perform explosive and powerful attacks that can cause damage to every enemy on screen. Some enemies can also build up overcharge and deal instant death to your group in one hit. That leads to my biggest problem with the game…no matter what level my characters were, it almost always seemed like they were much weaker than any opponents that I would face in dungeons. I can understand making the dungeons a challenge and enemies powerful but it seemed like most larger groups of enemies you faced could kill your party in one hit while your entire group would only deal out a less than a hundred points of damage a round for an enemy with as much life as you. It felt somewhat unbalanced in that aspect.

Overall combat and inventory are handled extremely well in “Battle Chasers: Nightwar”. Attacks are easy to perform if you’ve ever played any turn-based RPG ever but “Battle Chasers” stands out for its comic book flair. Enemies will get hit and you’ll have Adam West Batman-style effects occur or they’ll turn colors if effected by in game effects. There are a lot of tactics involved in combat so a good choice of party members for certain situations is a necessity.

I’ventory is fairly simple to figure out and for once you pretty much have unlimited inventory for your characters. This is a good thing since you are able to create a variety of weapons and objects with different status effects for various occasions. I also really liked the available monster tracker which, over time, reveals information on certain enemies after you’ve defeated them a certain amount of times.

One of my favorite things about the game was definitely the art style. I’ve always been a fan of his work since his days on Uncanny X-Men and as I mentioned before, this game is basically his artwork come to life in video game form. The characters are a heavy mix of anime and modern American comic book style and you get that look in every aspect of the game. From the beautiful, vibrant backgrounds to the comic book look of enemies in combat and in the Overcharge attack sequences. It’s one of the best looking games I’ve ever had the chance of playing.

While it seems that turn-based RPGs are a dime a dozen anymore, “Battle Chasers: Nightwar” stands out not only for it’s amazing art direction but for its unique take on many of the classic role playing game tropes such as inventory management, mini-games and combat. While the characters are somewhat bland and the plot is simple with not much emotional attachment to any aspects of it, the game is for the most part pure fun. It takes what could have been a dark and gritty game and turns it into a bright and vibrant action adventure RPG that comes straight from a Dungeons and Dragons session. If you’re looking for a change of pace from the overly Japanese RPGs out there or are sick of the doom and gloom brutality of games like “Dark Souls”, then “Battle Chasers: Nightwar” is just what the cleric ordered.