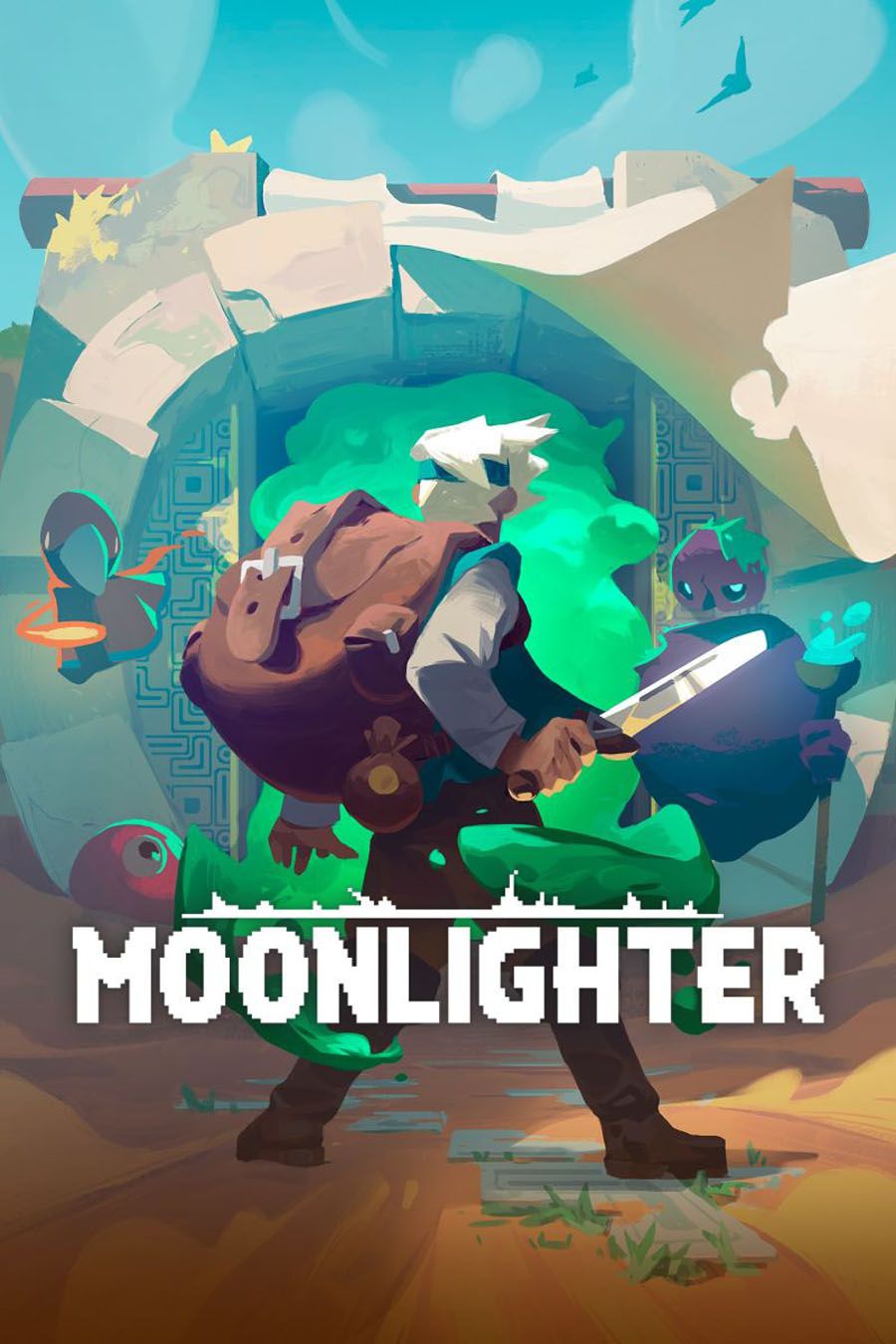 “Moonlighter” is a game that takes bits and pieces from various RPG games and combines them together to form somewhat of a unique game experience.
You find yourself as a shop keep named Will who has inherited his father’s shop in the village of Rynoka. Outside of the village are a cluster of magical dungeons rich with loot…and danger. By day you manage your shop…by night you adventure through the dangerous dungeons hoping to land rare and unique loot to sell at your shop or trade to turn into components at other various shops around town.

There is a hearty mix of action, inventory management and merchant simulation. Personally, I’ve never enjoyed job simulation games because I’m not really that good at them but “Moonlighter” manages to simplify these tasks to a much more manageable and fun level.

Adventuring in the dungeons is both fun and nostalgic. Levels are laid out much like a classic Super Nintendo RPG would be and contain randomized rooms, enemies and loot…with hundreds of items becoming available to you and your shop throughout your questing. The graphics once again bring about that nostalgic feel with a pixelated look that is full of vibrant colors and intriguing designs. Add in the chiptune soundtrack and you’ll think that it’s 1992 all over again. You definitely have to give props to Digital Sun for producing a game that is unique and progressive within its genre while also bringing the nostalgia along in one big digital Trapper Keeper.

While the nostalgic feel and amazing retro graphics and sounds mesmerize you and overtake your gaming senses, the gameplay most often becomes repetitive and tedious. The main task at hand is to explore the dungeons, collect loot, sell said loot at your shop and then rinse and repeat a tiresome amount of times. If you die while exploring a dungeon, you lose nearly your entire inventory that you’ve discovered but if you decide to bail on the dungeon and teleport away without finishing it, you’ll lose money. You have to explore the same dungeon albeit a randomly generated one…to an extent…dozens of times if not more. It took me well over half dozen hours to finally complete just the first dungeon with probably 30+ tries in the same location. And there are at least two more dungeons to complete.

When it comes to the shop keeping part of the game, it is both extremely fun and addicting to play but also seems to force you to rush around your shop adjusting prices, restocking and ringing people out. If you miss out on a customer at the register, they leave your store and don’t come back to purchase anything the rest of the day. The pricing system and trends menu allow you to get a grasp of items that are hot and ones that are not, which you may be able to trade for other components for weapons, spells or other various items.

“Moonlighter” is a novel idea that combines a lot of fun elements from various eras of RPG games and, while it can be addictive at times, it happens to suffer from gaming fatigue. With the time that I’ve spent playing the game I don’t really feel like I’ve progressed much outside of bringing in other merchants to town. There is a rush while questing in the dungeons as well as a hurried time limit while working in your shop and, when topped off with the need to repeat dungeons endlessly in order to level up so that you can finish said dungeon, makes the game less enjoyable and memorable. Instead of savoring the randomly generated levels and working the shop while casually maintaining your inventory and prices, everything seems like one big blur and that’s extremely unfortunate for a game that was so intriguing and one of a kind.