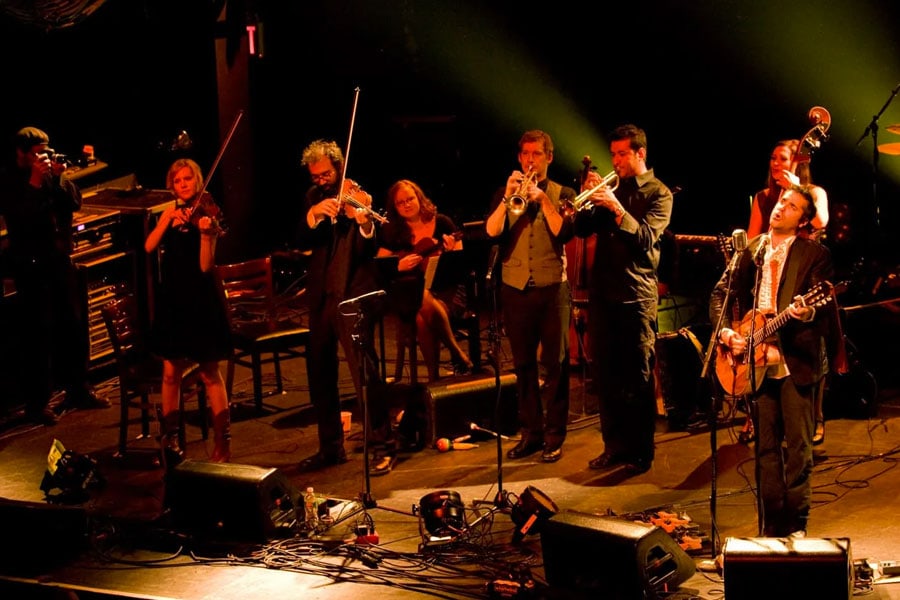 I only just discovered DeVotchKa last summer. I found out about them right before their music appeared in the film Little Miss Sunshine. It’s kind of hard to describe their sound but I always just say to people that they are like a mariachi indie rock band stuck in a Spaghetti Western movie. I knew as soon as they came to NY, I would check them out because they seemed like a great live band. Well I was right!

I believe the last few times DeVotchKa has played NYC, they have either played at Spiegeltent or South Street Sea Port. Not sure why that particular area of Manhattan appeals to the band but it’s definitely an interesting section to see a show. It’s right by the Brooklyn Bridge and right on the sea. Spiegeltent is a traveling circus tent and there’s only a few left in the world. I guess they just have burlesque shows there now but some bands perform in them as well, like DeVotchKa.

Only problem with this show was it was so late at night, in the middle of the week. Us common folk have to work ya know. Thankfully I took off work the next day to go to Warped Tour but I’m not too sure how I survived that day. The doors to the venue were suppose to open around 11 but the other show got delayed. I wanted to get to the venue early to get a good spot to take pictures, and then my friend and I ended up waiting online for pretty much 2 hours. The show didn’t start until almost 12:15am. I felt like I was missing time (like being abducted ‘missing time’). And what made things worse was having to listen to some annoying guy, with a really high-pitch, squeaky voice talk for 2 hours straight. He sounded like that annoying guy on the Jay Leno show, but worse. Talk about torture!

The show finally started and I was right in front of the bass/tuba player. The venue quickly filled up to capacity, which was around 600 people I believe. The band opened up with “Vengo! Vengo!”(or was it Head Honcho?) and another song I can’t remember off the top of my head. DeVotchKa played many of the songs I wanted to hear, including “Queen of the Surface Streets,” “I Cried Like a Silly Boy,” “Til The End of Time,” and “How It Ends.” I was just impressed with how many instruments each member played. Each member seemed to play 10 each, although not at the same time. NOW that would be impressive! Nick’s voice was great, Tom’s violin & accordion playing was outstanding and Jeanie’s tuba & bass playing was awesome! The Spiegeltent audience was treated to some special guests for this show, and it was a few string instrument players. The strings just added so much more to the music. I can see why DeVotchKa always plays at Spiegeltent because it’s just a cool venue to play at. The stage is towards the back in the circle, and there’s tables to sit at on the edge of the tent. Though I think that was priority seating or something. The venue is small enough that you can see the band from most angles.

As each song was being played, I was snapping my pictures away and dancing in place at the same time. At one point in the concert, some drunken old lady went up to Nick and tried to get his picture. She was telling him to pose again because his hand was in the way, he kind of just shrugged his shoulders and gave her his champagne bottle. I’m not sure which song was more the crowd favorite, “Queen of the Surface Streets” or “Til The End of Time” (From Little Miss Sunshine). Either song are great in their own way and glad to finally have heard those songs live. Every once and awhile the drummer Shawn would come out from the drum set and play the trumpet. Or sometimes he would just play the trumpet into the mic there. I’m really glad DeVotchKa played “We’re Leaving” because that’s one of my favorites from them. That song might have been the first song I really loved by the band. I would have liked to have heard more songs from ‘Super Melodrama.’ But for the most part, they played a lot of great stuff and got the crowd dancing and swaying. I’m not sure if it was towards the end of the set or during the encore, but an aerial dancer (like a burlesque dancer on curtains?) came out and danced above the crowd. I don’t know how to describe it, but it was freakin’ awesome. I think the girl who was doing that stuff above us was Nick’s girlfriend. She was flying and dancing above us, doing tricks as DeVotchKa played on. I kept looking at Nick look up at his girlfriend, while playing the thermin with his guitar. Definitely an interesting sight to see! That was a great way to end the show with.

If you ever get the chance to see DeVotchKa, please do so! They are an excellent band and very talented as well. Every time the band comes to NY, i’ll be there to see them. And let’s hope they play at Spiegeltent some much because that place is really cool too.