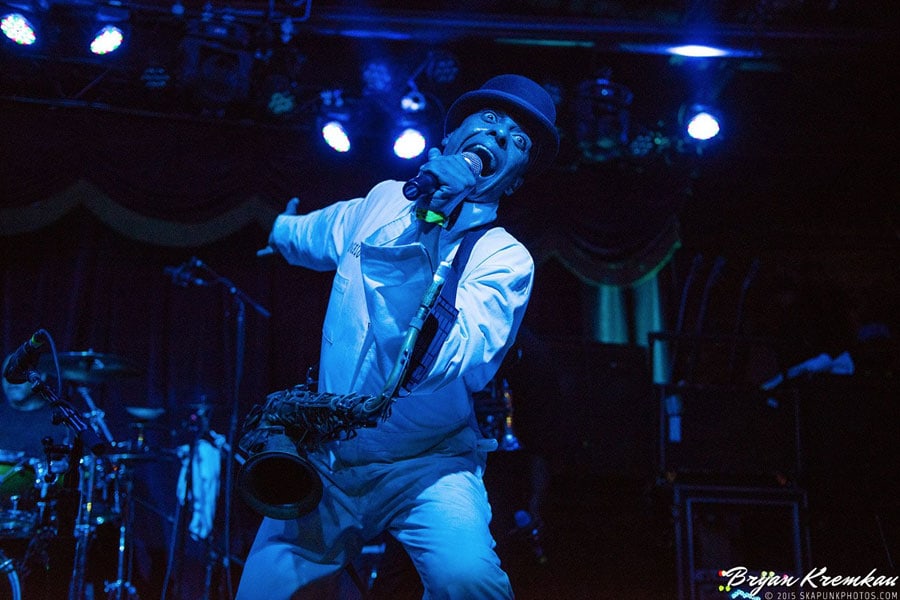 After about 15 years of being a fan of Fishbone, the stars aligned and I FINALLY had my opportunity to catch them live for the first freakin’ time.

Let me tell you a few stories about missing out on the band over the years. My luck and timing was so bad that I figured that I should probably just forget about ever getting the chance to catch them in concert. I was worried that something would happen leading up to the moment that they hit the stage at the Thunderbird Café. Take into account that I was supposed to be on the guest list for this show, but was conveniently left off. Luckily the girl at the door believed me and I had emails as proof and let me in since the show was sold out.

Next up came a show that they were supposed to play with Slightly Stoopid and Inner Circle around 2006. Excited to see Fishbone coming to town, I preordered my tickets early to make sure that I wouldn’t miss out. Days before the show, I discovered that Fishbone were double booked and would not be playing that show. Although I still went and it was a great show, it would have been epic to see those three bands playing together. Strike two.

A year later, Fishbone was supposed to play one of the summer festivals in Pittsburgh but again, for some random reason, dropped off of the bill. Strike three.

Then in 2008, they were playing a show in February. With the winter weather as unpredictable as it is in Western PA, I waited until the day of the show to see how the weather would be since I had an hour and a half drive ahead of me. Leaving work, the weather was decent but as I pushed forward and about a half an hour into my drive, I was confronted with a white out and a blizzard. The weather got so bad that the highway was completely shut down and people were directed back in the other direction. Strike four. Obviously, this was never going to happen to me…until September 8th, 2015 when they took the stage at the Thunderbird Café!

After a great warmup set by the obviously Fishbone-influenced band named Downtown Brown, the ‘Bone took the stage to “Servitude” and ripped through songs both old and new. The Thunderbird Café was surprisingly small, was packed wall to wall and was as hot as Hell. It was an unseasonably warm night and the place lacked anything resembling air conditioning. Girls were sweating and dancing in their bikinis while the “bros” slamdanced their sweaty torsos against anything within reach.

With heat levels reaching supernova sun levels, Fishbone kept the temperature up with a very diverse set. They performed the obvious classics like “Sunless Saturday”, “Lyin’ Ass Bitch”, “Ma and Pa” “Bonin’ In The Boneyard” “Subliminal Fascism” and “Freddie’s Dead”, “Everyday Sunshine”…a couple of songs from their new EP “Unstuck” and “Whipper Snapper” and a few surprise tracks such as “Cholly”, “Let Dem Ho’s Fight”, “A Selection”, “Crazy Glue” and their version of Sublime’s “Date Rape”…which was a major crowd pleaser.

By the end of the show, it was so hot in the club that Fishbone’s guitarist didn’t bother coming back on stage for the encore so they played “Party At Ground Zero” without a guitar for its’ entirety.

With the show over and the hot and sticky crowd making a beeline towards the unseasonably muggy September night, I realized that I have been missing out on one of the best live bands out there today. It wasn’t just a Fishbone concert…it was the Fishbone experience. The guys in the band endured the scorching temperature and put on one hell of a show to a venue that had hundreds of people packed in like sardines. Forget their age too, they played their asses off as if they were a bunch of up and coming teenagers full of piss and vinegar and this was their first gig.

Barring the twelve years of craziness I’ve dealt with in order to see Fishbone live and in person, I can say that it was 1000% worth the wait. Here’s hoping that I don’t have to deal with that crap in between their next Pittsburgh show because I must be there!