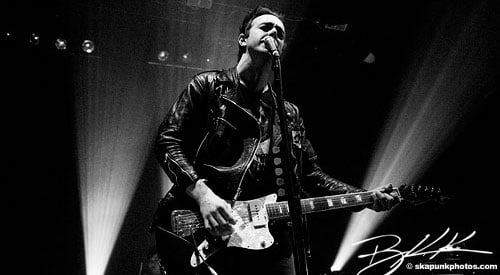 Monday night, Bryan and I were in the city for Glasvegas’ Webster Hall show, and the band did not disappoint! Signed by Sony/Columbia, Glasvegas are currently on tour in the US in support of their self-titled debut release, and have already spawned two popular singles, “Geraldine,” and “Daddy’s Gone.”

The opening band, Ida Maria played for about 30 minutes to warm up the crowd and they were certainly… interesting. Hailing from Norway, the lead singer was sporting some very outrageous and funky hair do. She also came out and announced to the crowd she was major PMSing. I think that was a warning or something because as most guys should know, you RUN when that is announced. Unfortunately, we were held captive. During that time, I was getting obnoxiously bumped into by a drunk girl who first hit on me, than sprayed spit all over the back of my neck as I turned away disgusted. I guess drunken woman don’t care about wedding rings, but I digress. Ida Maria finished up and the crowd got ready for the main event, Glasvegas.

The Scottish quartet started off with one of their hits “Geraldine” which I know has been getting a ton of airplay on Sirius XM and other radio stations, and it’s my favorite on the record. James Allan, lead singer of Glasvegas has a very thick Scottish accent, from the east side of Glasgow, and sometimes it’s very tough to understand. He also has a striking resemblance to the late, great Joe Strummer of The Clash. The band was solid and definitely was having a good time to the sold out crowd at Webster. Glasvegas performed pretty much every song on their record, excluding “Stabbed,” a slow and haunting song. From my vantage point, the sound wasn’t that great. I was off to the side and since the speaker stacks were facing into the crowd, it wasn’t that clear. Once I moved to the back, the sound was much better.

Set list: (Might be off by a song or two)
Geraldine
Lonesome Swan
It’s My Own Cheating Heart that makes me cry
Polmont on my mind?
Fuck you, It’s Over
S.A.D Light
Flowers and Football Tops
Please Come Back Home
Go Square Go