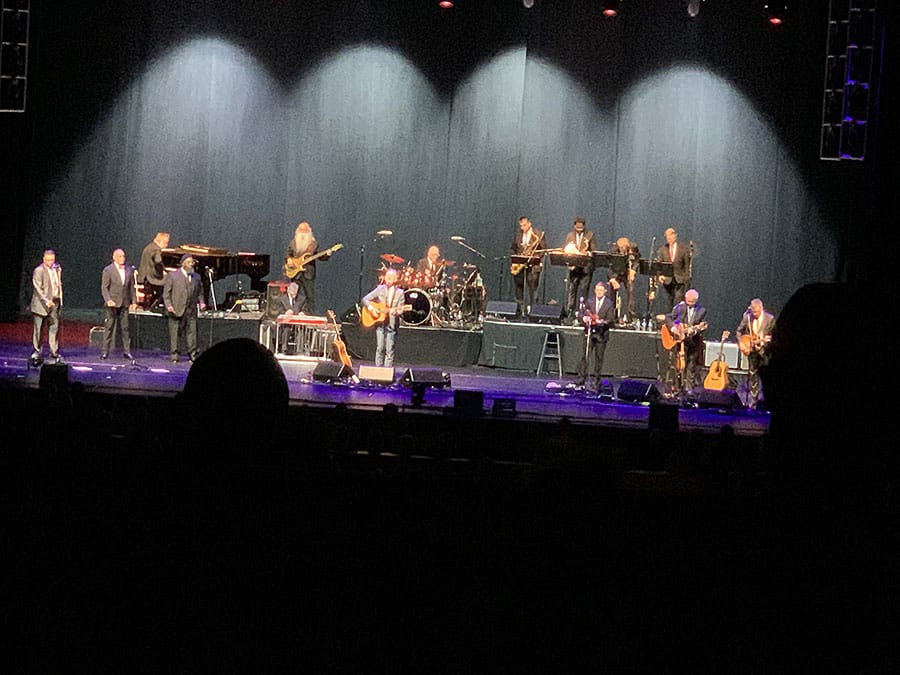 It’s rare that a rock concert commences with a coin toss, but that’s precisely what occurred at 7:30 on the nose Saturday evening at the Wolf Trap in Vienna, Virginia. Lyle Lovett won the toss, telling the MC he and his “Large Band” would go second on the double bill with Chris Isaak.

Accordingly, moments later, the California crooner was back onstage, boasting one of his signature jackets—which made the artist sweat even more in the evening’s heat and humidity. Isaak and his backing crew kicked off with “American Boy” followed by “Somebody’s Crying,” the impossibly optimistic heartbreak song from his 1995 album “Forever Blue.” Isaak took a pause to say hello to the Wolf Trap’s fans, saying that he appreciated people being there to hear live music of any stripe, let alone his own.

Isaak has been at the music game for four decades, and the evidence of his experience was clearly evident given the tightness of his performance and the professionalism of his band. And, oh, if you might ponder how his voice sounds, Isaak’s timbre was as silky smooth on “Wicked Game” as it was when he first recorded the sex-dripping ballad in 1989; it remains perhaps the greatest “panty-dropping” tune ever written.

Isaak continued with more of his signature rockabilly love songs such as “I Want Your Love,” but showing his appreciation for his roots, he provided a spirited cover of “Ring of Fire” as well as a cover of Roy Orbison’s “Only the Lonely.” Isaak shared that early in his career, Orbison gave him a vote of confidence, which isn’t surprising given the similarity of their styles.

He was in tip-top form not only as a singer but a performer, peddling delightfully sophomoric jokes for the audience and doubtlessly well used gags with his band, such as commencing a song in Spanish with one of his band members and inviting everyone to “sing along”—which of course they did not, thus terminating the joke.

Lovett’s set featured the Texan and his nearly dozen backup musicians in fine form walking the Wolf Trap through Lovett’s catalog as well as covers of his many heroes, including Nat King Cole. Lovett’s backup artists included a trio of African American singers from Nashville and Los Angeles, who absolutely ran away with anything Lovett assigned to them. They alone could be their own act, but that’s pretty much true of anyone in the Large Band, including Lovett’s longtime bassist Leland Sklar, and ​​Brad Leali, one of his two saxmans whose day job is teaching at the University of North Texas.

Lovett brought Isaak back on stage, and the duo’s chemistry was infectious, especially on the comical “We Gave Each Other Covid.” Naturally, Lovett’s set also included “That’s Right (You’re Not from Texas),” which thrilled several of my nearby concertgoers—as well as one lady who danced the entire evening away.

It was a fantastic double bill, and none left the event unhappy—despite the heat and humidity. If there’s one thing to take away from the evening, it’s that, yes, we missed live music for certain—but given the thanks that both Lovett and Isaak gave to the Wolf Trap crowd for rejoining them for live music after two rather uncertain years, they have missed it too.