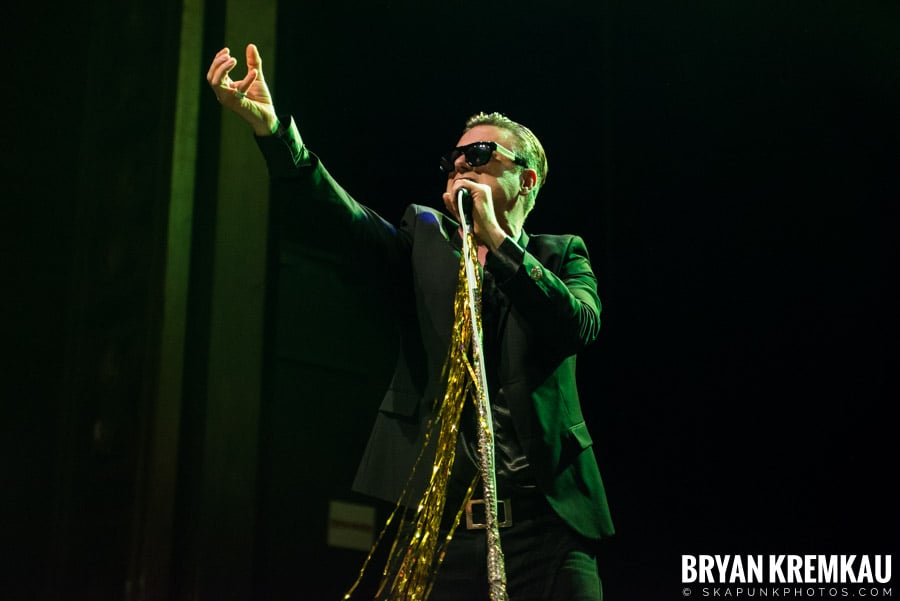 Every now and then, the punk rock cover band known as the Me First and the Gimmes Gimmes decides to come out of their holes and put on a fun set for their fans. It might be at the Warped Tour, or just in California, maybe at some kid’s Bar Mitzvah, but they don’t play live shows too often. That’s why I was willing to give up the season premiere of 24 for it. But then again, that’s why the VCR was invented.

My friends and I got to Irving Plaza early, got some awesome pizza at that pizza joint around the corner from the club. Yummy greasy pizza, big slices too! I go there every time I go to Irving Plaza. Sometimes I go and wander Virgin Megastore but I didn’t this time. After that, we waited on line for over an hour because we knew it was sold out. Eventually, we got in and made our way to the balcony; then waited for another hour for the first band to get on stage. Irving Plaza entertained the crowd with sci-fi images and music. Some of the music was good, and then later on it just sucked. Smoke or Fire, formally known as Prince, I mean Jericho… came on stage. I went down to the photo pit and took some pictures for 3 songs. I really hate that three-song rule of standing in the photo pit. What if the band starts off with three really short songs; it fucks the photographers over. But I took some pictures and then ventured back upstairs. I guess the crowd hated the band, just because they had Red Sox shirts on and we’re saying shit about the Yankees. And just like I imagined, the band got booed and we’re continuously heckled by some stupid people sitting near me. The Sox won, it’s over, deal with it Yankee fans. God I hate baseball. What’s even worse are the fans.

Smoke or Fire was okay, they seemed to rush through their set after they got heckled and got off the stage. I wouldn’t blame them. After Smoke or Fire, I went down to the photo pit to wait for Me First. They came out with black jeans and black turtlenecks. They said it was a new look, and Fat Mike said this was the first time he bought black jeans. Brian Baker of Minor Threat, Dag Nasty, and Bad Religion played guitar for the band this time, and he seemed like a great fit. The band knows they aren’t original but they know how to have a great time. A Me First show is fun because of all the between songs banter among the group. It might piss off certain people in the crowd, but screw them, the band is a riot! Some of the stuff they say or do is hilarious, and it almost seems like you get a 2-for-1 thing with comedy and music.

They started off the set with “Danny Song” from Have a Ball album. They continued with “Over the Rainbow” and then Zeppelin’s “Stairway to Heaven.” Thankfully they didn’t play Stairway to Heaven too long. Before each song, Spike would say: “Ok, this is a cover.” I found that to be amusing. Other songs they played were “Wild World” “Heart of Glass” “Come Sail Away” “I Believe I Can Fly” and “Seasons in the Sun.” They played “Rocket Man,” one of my favorites from them…well one that they cover. 75 percent into their set, they took a break and did a wardrobe change. They came out in their Hawaiian shirts and played some of the songs I mentioned above.

They ended their set with “End of the Road” and I thought that song was fitting for the last song of their set. They came back out for an encore and played 2 songs. They gave the crowd a choice between a show tune or Paul Simon song, the crowd quickly responded to NO SHOW TUNES. Yeah I’m not really a fan of show tunes or “Are A Drag.” I don’t really like the album because I don’t know most of the songs ha. They finished their awesome and fun set with “Don’t Cry For Me Argentina,” Not sure why they wanted to finished the set with that song. I would have gone with something more energetic. All in all, if you ever get a chance to see Me First and the Gimme Gimmes live, definitely do so. They are bunch of funny guys who play catchy cover songs.