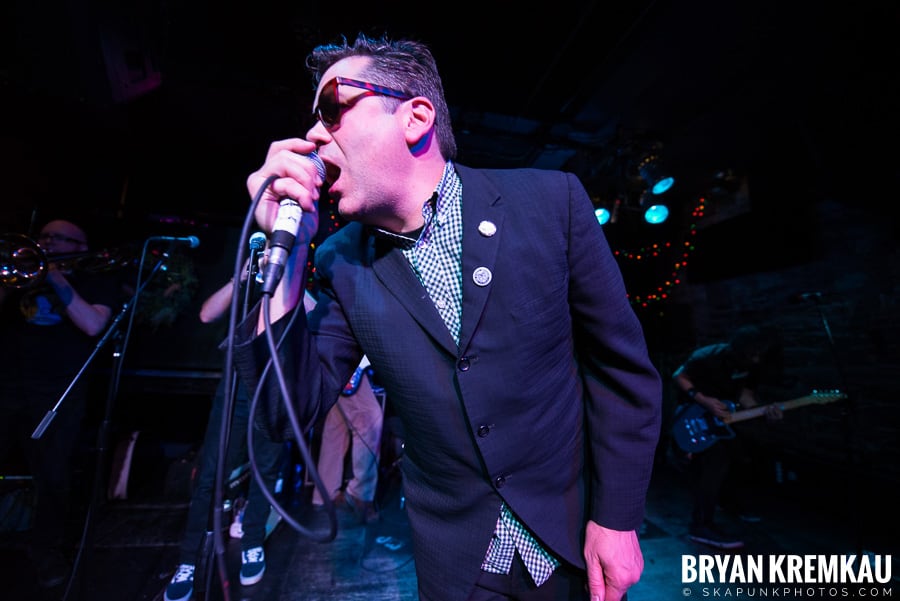 This past week was concert week for me. Two trips to Pittsburgh in three days, ten hours of sleep those two nights and seven different bands made for one helluva tired guy by the time that the weekend came around. With cold and gloomy weather outside, it was good to be inside enjoying some live music.


The first band up was the Masters of the Universe. They played with Mustard Plug the last time that I seen them. They sucked then and they suck now. They don’t even merit a full paragraph from me.

With the youngsters given their turn on the stage, it was time for the grizzled veterans to take the stage. This particular tour is a co-headlining tour between Mustard Plug and the Voodoo Glow Skulls. The Voodoo Glow Skulls were up first this time. As usual, people came out of the woodworks and started a massive circle pit with the Glow Skulls first song, the ever rockin’ “Insubordination”. The mosh pit then turned to a skank pit with “We’re Back” and continued to alternate throughout the night. I thought that the Voodoo Glow Skulls set list was pretty good but could have been better. They played “El Coo Coi”, “The Band Geek Mafia”, “Left For Dead”, “The Ballad of Froggy McNasty”, their crowd pleasing rendition of “Charlie Brown” and closed with “Shoot the Moon”. The Voodoo Glow Skulls have a new album out titled “Southern California Street Music” and they sprinkled in some songs off of there as well. I wasn’t impressed with VGS’s latest sonic recording and felt that the time could have been better spent by playing “Fat Randy”, Symptomatic”, “Delinquent Song”, “Love Letter”, “Bulletproof” or “High Society”. I understand that they have to push the new stuff but when it’s not that good, you’re left kinda disappointed. Overall, the Voodoo Glow Skulls always get things moving and the juices flowing. With the lack of a lot of the good songs that they usually play live, their set was still pretty damn good.

Again, as with last time that Mustard Plug played Pittsburgh albeit with Against All Authority and not the Voodoo Glow Skulls, most of the punker crowd that was there disappeared before MP took the stage. This just clears more floor space for the rude boys and rude girls to get their skank on. With not much of a wait between bands all night, it wasn’t long until Mustard Plug ripped into their first song. Now Mustard Plug also has a new album out called “In Black and White” and unlike the VGS album, I really enjoy this album. It’s up there in “Pray For Mojo” territory. Not quite as good as “Evildoers Beware” but more listenable than “Yellow # 5”. Of course Mustard Plug was going to play some new stuff and after “You” came my favorite new song “Hit Me! Hit Me!”. That song is pure Mustard Plug of old. The Plug also played “Over the Edge”, “Real Rat Bastard” and a handful of other new songs, much to the delight of the crowd. Of course the usual staples of a Mustard Plug show were there with “Skank By Numbers”, “Brain On Ska”, “Lolita”, “Go”, “Throw A Bomb”, “Thigh High Nylons” and “Beer (Song)”. They came back for an encore and gave the crowd what they wanted with “Mr. Smiley” and “We’re Gunna Take On the World”.

When it was all said and done, my ears were ringing, I had an estimated five hours to rest before I had to get up for work but it was definitely worth it. I go and see Mustard Plug every time they come around the Pittsburgh area knowing that it will be one hell of a good show. This time around, I got to see another great band playing with them with Voodoo Glow Skulls tagging along and I discovered a new band with Barkers Beauties. See ya next year Mustard Plug. I can’t wait!