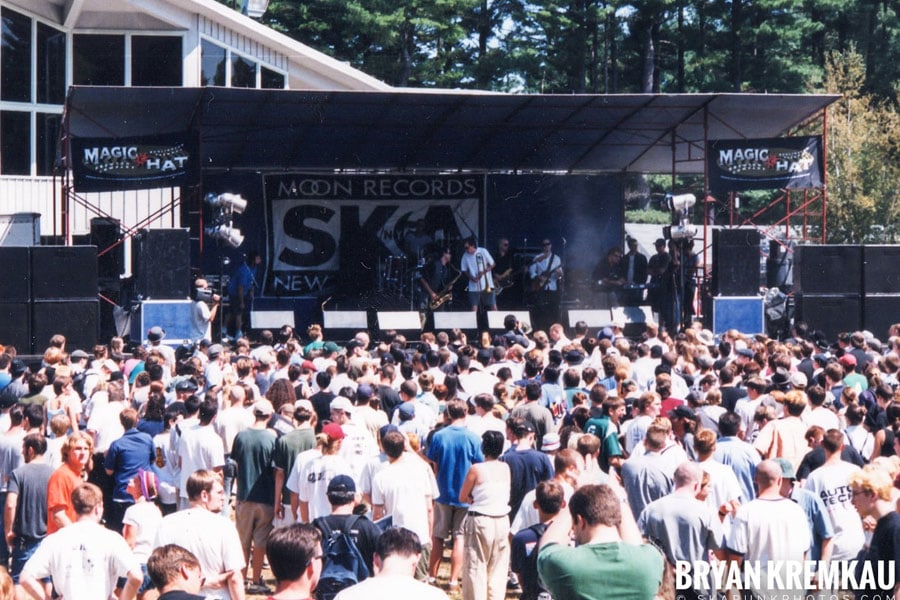 Hello, and welcome once again to a long ass review, this time the New England Ska Fest. Im bored sitting here in my dorm room because our damn internet isnt hooked up yet. Anyways, this concert was great. Great bands, great venue. It was quite a drive for us. We went to my aunts house in Albany the night before to cut some of the driving time. We left her house around 630am. Yikes! I hate to get up early, so we got to the ski area around 1000am.

We sat around in the parking lot just chillin for an hour or so until they let us in. This was held at a ski area so the venue was pretty big. We walked around and talked with some people we knew like Edna’s Goldfish and some of the Moon Crew. First off was Wild-SKArd winner Metro Stylee, and like usual practically no one danced. They were pretty good even though no dancing from the crowd. The openers always have the tough job of starting off the show to a fairly calm audience. They played some songs off their recent release Soul Garage Soul like their opening track Evil Eyes and some others I cant really recall at the moment. After them was Big D and the Kids Table. They had a strong support of followers since they were sort of local, I think. I dont know but I just didn’t get into it. I didn’t mind the large piece horn section but the singer wasn’t that great. He screamed too much and just turned me off.

So I just walked around and chatted with our friend Jessica from Beantown Thats so wicked cool! . Up next was Kicked in the Head, and I didn’t pay any attention to them. I was hanging out at the Moon Table with Adam Coozer annoying him. New York Ska-Jazz Ensemble was up next with a surprising early start. I figured they had to be somewhere else later that day or night. Who knows, certainly I didn’t. They played some songs from the 3rd album Get This, and played songs like Filthy McNasty, and a Toaster song Properly. They seemed to play longer than 30 minutes, and screwed the next band, Edna’s Goldfish out of ten minutes.

I forgot to mention Noah Drunk ass Wildman was there to MC the event. Man, can this guy drink anymore? Who cares, he was hilarious. He started every introduction with Yo Yo Yo, whats going on? It was about 135pm and he was already feeling it. He introduced the band by being dropped from Ska Satellite. Then they were picked up by Moon Records. YEAH! They started the set off with a new one and their songs just get better and better every time. Not like they are crappy, but all their songs are awesome. They rocked the house, and in my opinion were one of the top bands at the show. They played some great songs like Im Your Density, Veronica Sawyer, Avoiding the Swerve, and Eventually Anyway. They got everyone to get movin and groovin and kicking up the dust. Hmm. how pleasant! Brian, from the goldfish turned purple while on stage because he was so hot out. I’m surprised he didn’t collapse. Anyways, they were awesome as usual and finished with a new song Invinsible, which is nice lovee-dovee rockin song.

After the goldfish, I rushed over to watched the Pilfers. Word from the show was that they just signed with MoJo Records. Well good luck to them. They sold many first albums D.I.Y for their first year of existence, so they deserve to get more exposure than they have already gotten. They played some new stuff like Aqua, and another new one I like but don’t remember the name. They also got the crowd jumping and singing along to the chorus verses. They also played some songs from their album like Show no fear, Rollercoaster, Generation, Shits up in the air, and Yakuza. They were another great band. (Look, the whole concert was great, every band was awesome, so look forward to me saying that the rest of the review.) Next up, Oi/Ska from the Skoidats. Oi Oi Oi! They played a lot of their faster stuff which was good. They played Saturday Skins, Last night, Goggles and binders and Granted. They got a lot of the skins going crazy in the crowd and on stage. They started to get a little rowdy and started spraying beer all over everyone. I would have been pissed if I was there getting poured on with beer. Plus if I had my camera out.

After the bloody Skoidats, were Skavoovie and the Epitones, another Baaaaasssstooonnnn band or as Coozer calls them Skaboobie. I never saw them before and was quite impressed with their very traditional sound. They played some stuff like Aquaman, and a lot of stuff Im not familiar with. During one song, I think king of the mountain or something like that and some guy or someone with the band went on top of the mountain well halfway and started carrying on and started mooning everyone. ewwww!!!

Next up was the Allistonians, who were yet another drunk band. They played some stuff that I knew like Allston, Mass, and Alex Beam. Other than that I dont know. They were pretty decent. Dropkick Murphys, not a ska band, but nice enough to play a show everyone one some Street-Irish Punk. I love this band and was glad to see they were playing the ska fest. They have a new singer Al Barr formerly of the Bruisers. Personally, I cant tell the difference in singers. He sounds like the first singer, Mike. They played Do or Die, Firestarter Karoke, Never Alone, Finnegan’s Wake and I think they finished with Boys on the docks. They noted during the show that their currently wasn’t any venues with all ages shows so thats why they were playing the fest. I think thats pretty cool to be dedicated to their hometown and to have a chance to give back to their fans, young and old.

Those hosers from the Great White North were on stage next. Noah Wildman introduced them saying I say about, you guys say aboot ok thats good, eh. They started off with Mission Aborted, and continued to play other songs from both albums like Pee in the elevator, Change, My decision, Skah of Iran and ended with My Love for a Vampire. It was pretty cool when the trombone player went on the speakers and was playing up there.

Spring Heeled Jack came on next and I give them the most outrageous award. I just saw them like a week ago so I didn’t expect them to be so wild. They got everyone wet be bringing out these huge supersoakers and having their crew throw water balloons out at everyone. Also they threw out ice pop things and juice. Those were fucking heavy. One hit my foot and I chucked it back and hit someones head in the front row. Anyways, they played some new and old stuff like Running Man, Pay Some Dues, Electric, and soon to be hit Jolene. Coolie Ranx came out and sang Man of Tomorrow for them which was cool. Overall, their sets were one of the best.

Next up was Mephiskapheles. Brendog came out in a cloak and said Welcome to Hell! They started off with Mephiskapheles, and then went into Break Yer Ankle Punk, and played some other stuff. They had these skins on stage dancing and they were pretty stupid looking. Get off the fucking stage and dance! Meph also played songs like King Tit, Bad Toupee, Saba, and finished with Doomsday. Amazing Royal Crowns were up, and well I cant stand them. They play maybe one or two songs and then they get annoying. Plus they played longer than they were supposed to. NEXT!I would like to add that I like some of their songs but than it just sounds too much like country, and well..country music sucks. They played “Do the Devil” and some other good songs on their album. Plus the lead singer talked about the Royal Crown Revue situation.

Noah Wildman by this point was shitfaced beyond belief and started dissing Amazing Royal Crowns by saying Well, now for some ska. gee, wadda ya know? Now for the Amazing Royal Mustard Plug! Mustard Plug was one of the better bands of the night plus it was getting dark so the pictures we took came out dark. Oh well. They played songs like Box, Mr. Smiley, Too Stoopid, You, Go. Plus they too had water guns and were squirting everyone. They finished the set with Beer Song. They would have ended earlier but they said Hepcat wasn’t ready so they said oh well their loss. Finally, Hepcat was on after all those bands and my freakin’ legs were tired. I felt like I was going to fall over. I didn’t stay the whole set because of this reason. They were good but it wasn’t the same without Bad Manners. B.M would have earned the headlining spot but what can you do when they cancel on you two weeks before the show?

Anyways, Hepcat played, of what I saw, Bobby+ Joe, Hooligans, Cant Wait, and some slow ones but I forgot which ones. Overall this concert was awesome. Im glad I went and my dad was nice enough to drive us up there. Thats the farthest I ever went for one show. Besides Florida when Less Than Jake played but I was on vacation. Whatever, Im sick of typing this so THE END.