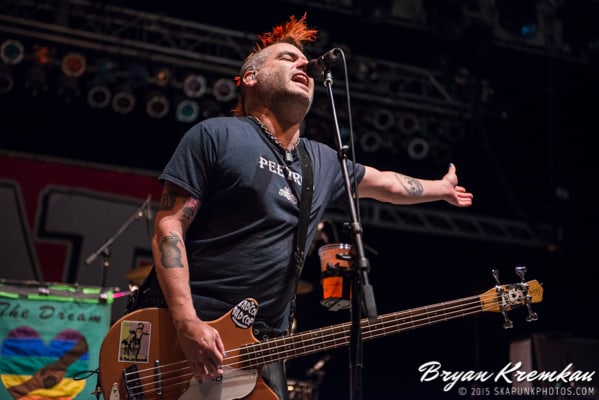 You might wonder why the most noted punk band today rarely plays New York City. Then, you might ask why, when they do come to NYC to support an upcoming album, they would choose to play BB Kings, a smallish club in Times Square. After pondering that for a while, you might even follow up with the question, why only one show? When you take into consideration NoFX’s 12-date national tour, (aptly titled the “You Call 12 Shows a Tour? Tour”) you may decide it’s best to stop asking so many questions.

For those lucky enough to have been in attendance on the first day of March, NoFX played quite possibly their best collection of songs. Eighteen minutes and nineteen seconds in, it was clearly the most amazing NoFX show ever; that’s right my friends, they opened with The Decline. The coveted masterpiece is the length of roughly 18 separate NoFX songs all rolled into one and is rarely played live. While this was clearly the high point of the evening, the rest of the set was equally amazing and did not disappoint. Well, except for the encore, which began with a lot of confusion among the crowd waiting for about fifteen minutes before the band returned to the stage. When the house lights finally went dim once again, the band played a mishmash of “Six Pack Girls” and seemed just as baffled as the audience.

Despite the fact that most of the band was obliterated on stage, especially Fat Mike, they got through the set swimmingly. They played old favorites “Linoleum”, “Perfect Government”, “Lori Meyers” and “Scavenger Type”. They also played newer songs, “She’s Nubs” off The War on Errorism, their cover of Rancid’s “Radio” and a few songs off their upcoming release, Wolves in Wolves Clothing set to come out 04.18.06 as well as songs from their latest EP, Never Trust A Hippie. There were also two semi-star-studded guest appearances, one from Bad Religion guitarist Greg Hetson, and the other, Steve-O of Sum 41.

Fat Mike has onstage banter down to a science, and despite being considerably belligerent, he is able to engage the crowd. When introducing “Bob” from the album Punk in Drublic, he began by first stating, “This song is off the best album we ever wrote”. Mike then thought for a minute and changed his mind saying that, Punk in Drublic is probably somewhere in their top five, with So Long And Thanks For All The Shoes coming in first. He also made a number of comments about Dropkick Murphy’s, who were playing another sold out show at a larger venue down the street and, according to Fat Mike, probably giving their fans a better show for their money.

NoFX might be so 9th grade to some more cynical fans, but the band has obviously matured along with its audience. This was especially evident on their last politically charged record, The War on Errorism. Hopefully Wolves in Wolves Clothing will continue this trend toward some more sophisticated music coupled with purely fun punk rock at heart. NoFX are no strangers to the Vans Warped Tour and will be promoting their forthcoming album, as well as their new EP, Never Trust A Hippie this coming summer. While they probably will not play “The Decline”, as it would take up more than half of their set, the show is sure to not be a let down for NoFX fans and newcomers alike.