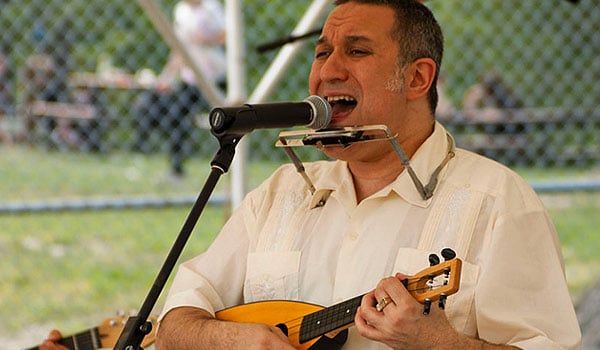 The 3rd annual Big Orange Bonanza festival (benefit for the Boys and Girls club) was this weekend and I was asked to take pictures of the event. Since I’ve been bored on the weekends, I decided to check it out since I haven’t seen a ska band perform in ages.

I headed over to the all day fest around noon, and the sun was already making me sweat like a pig. I’m not sure how many people were there but to me, it seemed like it was mostly bands. 30 bands were set to play on three stages til 8 or 9pm. There was a tent and a small stage on a baseball field, which ended up being the main stage. I thought the middle pavilion in the park would have been better suited for a main stage since there was more room. The final stage was in the back near the shitters, which you can evidently smell towards the end of the day. The main stage had some problems for a few hours so some bands had to be juggled around and put on other stages. I guess there was a problem with the generators. Definitely made things a little chaotic at times.

I walked from each stage area, checking out bands I never heard of before. Some I heard their names before but never actually listened to their music. I’m sure some of these guys sent me their music to review but I don’t think I actually listened to it yet. The first notable band of the day was Public Access of Albany (I think). They had two singers who played the saxophone and they had a fast-tempo ska-punk sound. The kids who were there were circle skankin’ to them the entire set. I didn’t know any of their songs but they did have an energetic set.

Surprisingly, the bands playing weren’t all that bad, in fact there were some decent bands. I caught songs from bands like Magic Goat, Brunt of This, Alto Sound Fiasco, The Menzingers and the Flaming Tsunamis. Magic Goat were from Syracuse and had a female singer who was really cute so that was one reason to stick around to watch their set. But they were also a decent ska band, and did a cover of “Pressure Drop.” Brunt of This played on the smaller pavilion stage, but I think they should have played the main stage because they were pretty good. It was weird to see no one seeing the beginning sets of bands but people ended up showing up towards the end. The scheduling was a bit out of whack, and I would have put some bands on the main stage instead of the smaller stages.

Brunt of This reminded me of Pennywise a little, but with a singer who looked like comedian Lenny Clark. No offense. But the band was really good and also did a cover of Bad Brains. The Menzingers hailed from Scranton, PA, an area I’m quite familiar with. They are a punk band with some ska-punk songs as well. They were good and did an interesting cover of The Clash’s “Straight to Hell.” A lot of the kids didn’t really see these guys in the beginning, because they were too busy at other stages it seems. Which I’m not sure, they were no one decent playing on those stages. Alto Sound Fiasco were a ska punk band from Massachusetts (Not Rhode Island like I put originally) and didn’t really have anyone watching them, which is unfortunate. People finally started to show up to see them when they were almost done. I kind of feel bad for bands that have to go through that. A lot of the people there seemed to be there for the Flaming Tsunamis…for some reason. I reviewed one of their albums and it just sounded like chaotic noise to me. Seeing them live pretty much reinforces that statement. Their live act was energetic so I decided to take some pictures of them. But that’s all they really had going for them. But the kids love them for some odd reason. Thankfully I got out of there since the band decided to throw red dye over the crowd & stage. I saw people covered in the stuff and I would have been super pissed with the band for that…especially if it got on my camera. I found out later on, the stage crew made the band clean up the mess after the show. At least with Gwar shows, they clean up everything and cover the monitors.

Later in the day, the bands I actually knew played. Last time I saw King Django perform he was still fronting Skinnerbox and was playing trombone. Now he plays the ukulele guitar and has a different band. The music was good & pleasant. People slowly danced to the music as I snapped some pictures. I didn’t really know the songs he sang though but I liked what I heard. After getting a quick bite to eat at the food area, I caught Tri-State Conspiracy. I thought they were the best band I saw that night. They definitely should have played on the main stage, but instead they got stuck on the little pavilion area in the back. Slowly people came to see the band and were dancing. I reviewed their CD and liked it a lot but the band really shines as a live band. Very energetic and their sound is really tight. The singer and I think his girlfriend were swing dancing for one of the songs as well. All I can say is he’s a lucky dude haha. I need to be in a band so I can get cute chicks. I guess girls aren’t impressed with photographers and critics these days haha. After Tri-State Conspiracy was getting over, I headed over to catch Westbound Train.

I never saw Westbound Train before but liked their CD on Hellcat Records a lot. I recognized the singer as the trombone player who used to be in Day 19. Day 19 used to be a NJ ska band that I used to see at Skater’s World. They were okay and got better throughout the years. I’m surprised to see how well he sung though. I didn’t really know the songs very well but danced in place as I took a bunch of pictures of the band. After taking some pictures of Westbound Train, I just chilled on the hill watching the band from afar. All day I had a giant migraine and needed to get home & pass out. I kept debating with myself, whether or not to stick around for the Slackers. But my aching head told me to go home so that’s what I did. All in all, I saw some good bands play and also witnessed some bad ones as well. But I’m glad I went and hope next year’s festival brings in bigger & with even better bands…I hope more people go to it too.