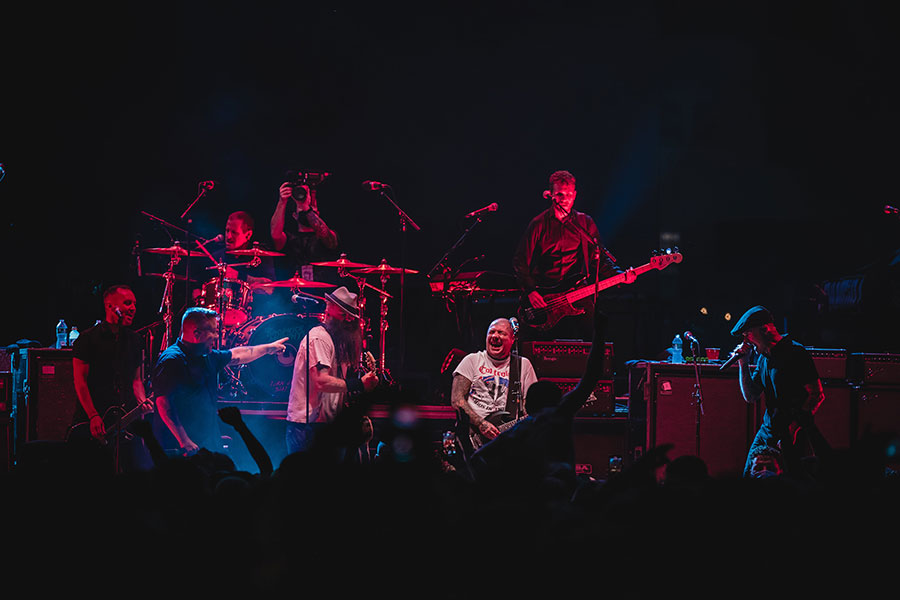 Back in 2007, a year out of high school, I joined my first ever band “The Bandits.” As you can probably guess, we were awful – combine a perfectly nasally teenage voice with so much distortion, you would think we were the pioneers, and that was pretty much our sound.

There was a benefit to it though: my tryout consisted of me learning how to play the guitar parts for Ruby Soho and Roots Radicals, leading to a lifelong love of all things Rancid. Combine that with Dropkick Murphys – a band many were introduced to from The Departed (but I luckily was introduced to back in the early 2000s from a friend in high school) – and you have one hell of a show!

Opening the stage was none other than The Bronx, a band I will honestly say I went into with no experience or expectations, but enjoyed immensely. They were loud, they had the energy of the headliners, and they had the crowd warmed up – the perfect start to a punk show!

Rancid took the stage next and, I won’t lie – I began to get more excited than expected. After over 18 months of not being in front of a stage with my camera, I finally broke the curse with one of my favorite bands. That’s not even an exaggeration as, if you would look at the centerpiece of my tattoo sleeve, you’ll see some of their lyrics on a boombox: When I got the music, I got a place to go.

To add to the inner excitement, the last time they played I was taking photos for the same two headliners and it led to some of my favorite photos. To say I was ready was an understatement – I NEEDED THIS. As expected, the band did not disappoint! They played all the hits you would expect off their older albums, almost every track (if not all!) off …And Out Come the Wolves, and a handful of newer tracks that the audience sang back at them for over an hour. COVID may still be a worry, but seeing folks crowdsurfing, singing back at Tim and Lars, cheering on Matt’s Maxwell Murder solo, or seeing Branden standing on his drums pumping up the crowd made it feel like we were back in 2019 before the world went to hell. It felt great.

Finally the main event hit the stage with their name 20ft high: DROPKICK MURPHYS! From start to finish their energy was at a steady 110%, matched only by a light show that you would expect from huge arena event. The Delta variant couldn’t scare the band or their fans away from the stage, though they were vocal about stopping crowd surfers (it is a pandemic after all!). There was a massive pop for the band when they spoke about their new album on the way, though if you ask bassist Ken – ‘we got a new rekkid comin’ soon!’ I will never tire of that Bostonian accent.

Playing all their biggest hits was a no brainer, but they had plenty of songs dedicated to folks that meant something to them, to friends that couldn’t be there, and of course brought Tim and Lars to the stage for a massive rendition of Barroom Hero – a tradition anytime they hit the stage together!
If you’re ever wondering whether or not to hit up a show with Rancid and/or Dropkick headlining – do yourself a favor and get your ass in front of the stage! You don’t want to miss those heavy Boston accents or Tim’s incredible dreaded beard!

Dropkick Murphys and Rancid will hit the road together for the first time since 2017, for the co-headlining Boston To Berkeley II Tour with special guests The Bronx on most dates. The U.S. trek–which was originally scheduled for May of 2020–runs from August 10 – October 16 and will also feature festival appearances by Dropkick Murphys and Rancid at Riot Fest in Chicago on September 18 and Aftershock in Sacramento on October 8.