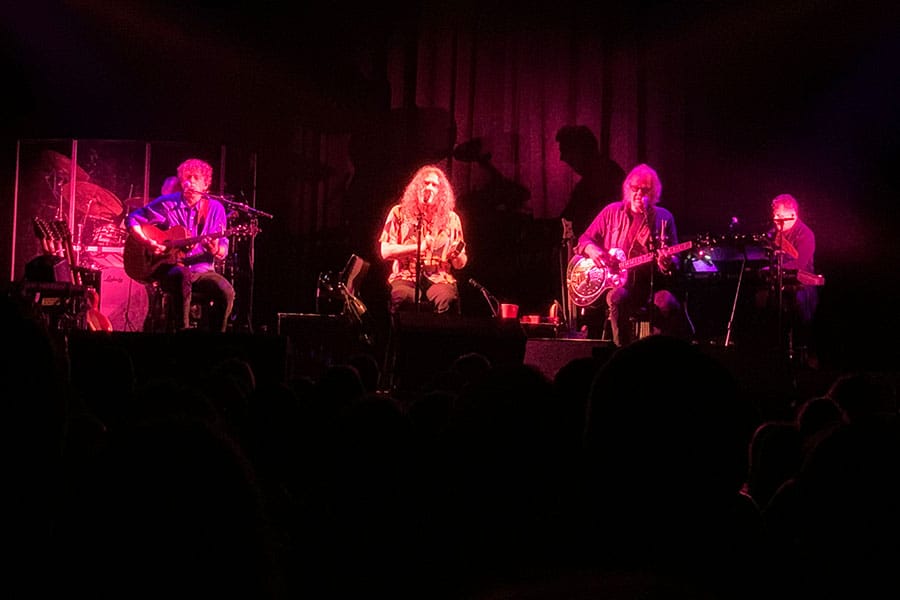 No parodies. No costumes. No videos playing while the man himself was offstage changing. No fancy special effects. Was this a Weird Al Yankovic concert or was it a self-indulgent exercise in playing the back catalog?

The king of comedic crooners brought his “Unfortunate Return of the Ridiculously Self-Indulgent Ill-Advised Vanity Tour” to the Carpenter Theatre in Richmond, Virginia, Wednesday evening for a few fun-filled hours that catered to the true Al fans by plumbing the deepest wells of the songster’s archive.

The evening got off on the right foot thanks to some madcap standup from Emo Philips, the sing-song-y performer perhaps most remembered cutting off his own finger in Yankovic’s movie “UHF” in 1989. With a combination of genuinely funny material and some purposely lackluster prop comedy, Philips got the Carpenter’s audience in the mood for fun. Among his best material was a joke to the effect of “everyone in this audience was bullied”—pause for knowing applause—“on the way here tonight.” Even the nerds can appreciate a little jab at their own expense.

After a short break, Yankovic’s backup band of many decades—bassist Steve Jay, keyboardist Rubén Valtierra, guitarist Jim West and, of course, drummer Jon “Bermuda” Schwartz—came out to play “Fun Zone,” the song that for years has singled Weird Al is about to take the stage. On the “normal” tours “Fun Zone” is prerecorded, so it was refreshing to see it played live, for many, for the first time—myself included. As the song neared its terminus, Yankovic bounded out from the wings, arms waving and those curly long locks flying behind him. The crowd roared as he took his place at center stage—naturally, donned in a Hawaiian shirt.

Yankovic’s first back catalog choice was “CNR,” a delightfully exaggerated song telling the fictitious exploits of the late actor and “Match Game” mainstay Charles Nelson Reilly. “Why Does This Happen to Me?” came early in the program, with Yankovic and his band absolutely in great sync considering how seldom he likely performs the song.

“Buy Me a Condo,” from 1984, made an appearance. The song, about a Jamaican man moving to America, is written in reggae style, and the musicians, of course, had no problem bouncing around so many different styles considering Yankovic writes across so many genres. And taking a potshot at our cultural moment, Yankovic joked at the song’s conclusion that it would be the end of the evening’s “cultural appropriation.”

His set also included some of Yankovic’s great anti-love songs, including “You Don’t Love Me Anymore.” A fun moment came near the end of that tune as Yankovic sang “got a funny feeling that you don’t love me…” While drawing out the moment, an eager fan filled in the “anymore,” which drew a hearty chuckle from the room as the songwriter echoed the word.

“Dare to Be Stupid,” an oldie but a goodie, was trotted out but completely changed from the recording’s Devo-inspired strains to now be jazz-like. It was an incredible demonstration of how an artist can interpret his own music in so many ways. This was also demonstrated with “Dog Eat Dog,” a Talking Heads-esque screed Yankovic said was imagined as if David Byrne had never been successful. The song, performed in a high-octane New Wave style on the record, was jazzified, once again transmuting something old into something entirely new.

Definite highlights included “Your Horoscope for Today” and “UHF,” the titular song to the film that is doubtless a favorite of many of the audience members. (Speaking of the audience, only a select few within my sight appeared to be rocking out and singing along. Too many, in my view, were sitting stock-still and staring. Oh well.) Yankovic also brought “one of my two Christmas songs,” “The Night Santa Went Crazy,” with the stage lights were hued in green and red as if to offset the inanity of the lyrics with holiday cheer.

Kicking it up several notches, it was time for “Albuquerque,” the incredibly long closing track of “Running With Scissors,” in which the narrator wins a trip to the New Mexico metropolis…only to suffer through a plane crash and crawling through the desert “for three days” to reach the Albuquerque Holiday Inn. At one point in the tale, Yankovic’s avatar encounters a “big fat hermaphrodite with a Flock-Of-Seagulls haircut and only one nostril.” At that lyric, he stopped the song cold to once again mock the woke police, wryly observing that the term had “gone out of fashion” since he wrote the tune in 1999.

Yankovic then resumed the journey through “Albuquerque,” only to again halt it at the lyric “where was I?”—at which point he said he had lost the narrative thread and would have to start all over. He mock-stomped off-stage, at which point Philips returned, recommencing his standup set from the very beginning. It was a brilliant maneuver, with the house chuckling along and no doubt wondering how long the gag would go on. After perhaps 90 seconds of Philips’s recapitulation, Yankovic ran back out to say he’d “remembered” the rest of the story. It was a spectacular end to the main set.

He and the band stayed on stage, pretending to check their phones and such before “realizing” the crowd was still there and thirsty for more. Yankovic then invited everyone to shout out their request for the encore, and he said he “heard” through the cacophony the odd choice but agreed anyway to “China Grove,” a Doobie Brothers cover because why not. And then truly bringing the house to its knees, Yankovic and company performed a non-polka, very jazzy mashup of “Amish Paradise,” “Smells Like Nirvana,” “White & Nerdy,” “Word Crimes” and, of course, “Yoda.” During that final chapter, he, Jay and West performed their patented vocal breakdown, complete with vocal sound effects, which went on for an impossible nearly five minutes. Not missing a beat, they returned then to the “Yoda” melody, inviting the audience to join in the final chorus about the little green Jedi master.

Speaking of Star Wars, Yankovic’s vocals throughout the evening were “most impressive,” especially considering he put far more va-voom into his singing than usual—almost aggressively so, but I don’t mean that in a negative way. His energy and his love for performing were much in evidence, and possibly explained why his vocal delivery was a bit gruffer than longtime fans are perhaps used to.

Furthermore, the absolute professionalism of his backup quartet is undisputed. Even though they’ve played and performed together for decades, Yankovic’s oeuvre is quite large, requiring his musicians to be ready for almost anything, especially considering the current set list varies from night to night. And prepared they were. Those crisp musicians who make it possible for brand-name acts to perform simply don’t get enough recognition, but it’s clear that Yankovic adores his bandmates—who make it all possible—as much as he loves his own fans. And Yankovic’s onstage banter with the band was enjoyable, even if thoroughly scripted.

Yes, this tour is indeed for the “true fans,” but judging by the energy, the verve and the excitement of “The Unfortunate Return” tour, here’s hoping it makes yet another repetition very soon.