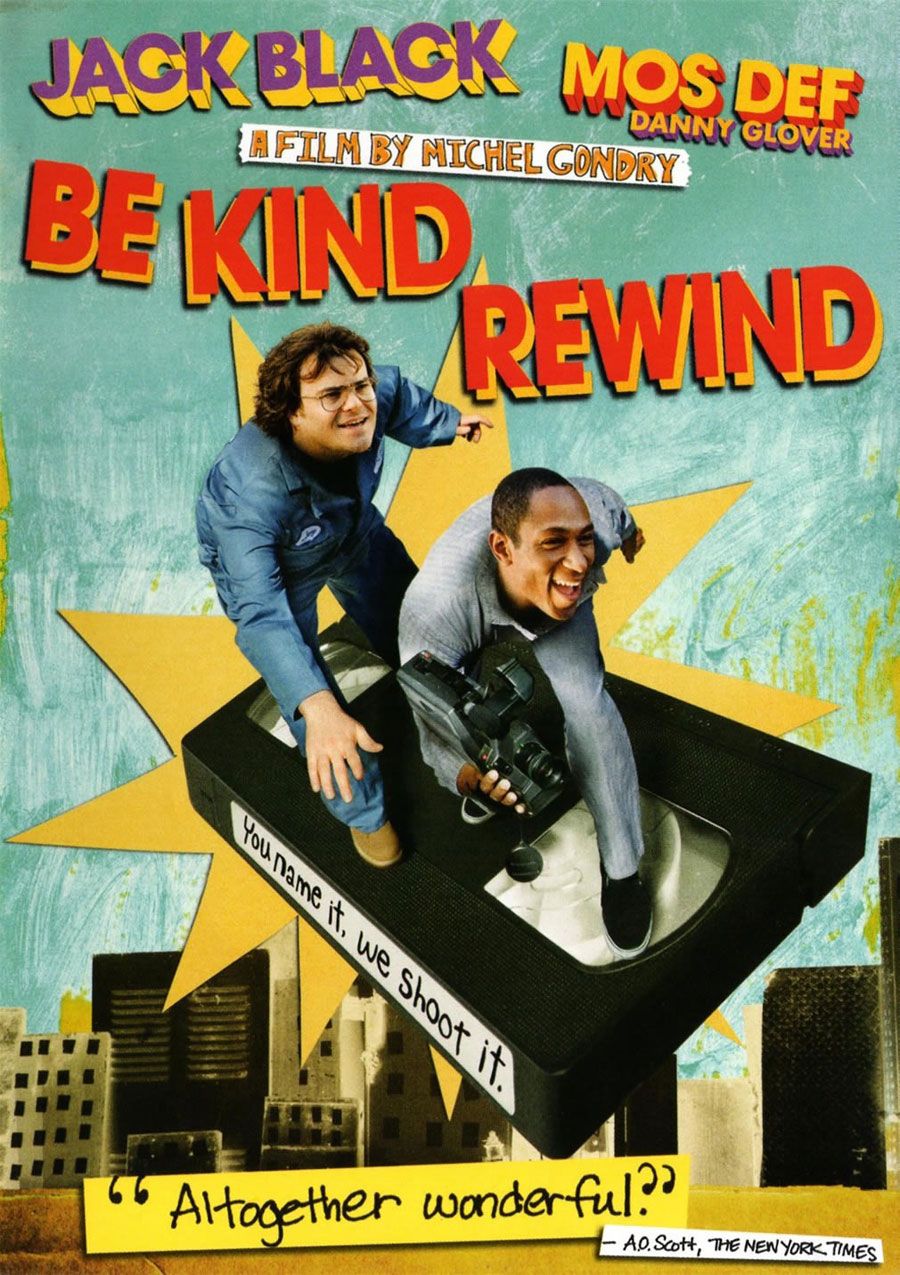 Going on sheer innovative talent, I can safely say that Michel Gondry is right now the world’s best director. Especially in a time where computer effects and modern technologies make it easier and cheaper to make everything look better, Gondry takes the same traditional approach cinema trailblazer Georges Melies did 100 years ago. Gondry, in his films and music videos, has used trick photography, various lens filters, and just plain cinema magic to truly make the cinematic image exciting again. He has long been a proponent of technology-free special effects, making him one of a dying breed.


I think, therefore, it’s only appropriate that his latest film concerns VHS, which is by all means dead. Unlike vinyl records, which many music aficionados believe is a more superior means of listening to music than CDs, the videotape has very few redeeming qualities when put agains DVDs. In Be Kind Rewind, Gondry only revisits a bit of recent nostalgia, but more than anything, he looks at the interactive quality that home video brought the world in the early 1980s – especially the ability to tape things yourselves.

While Gondry has cinematic innovation down pat (at times there are some shots that are hard to believe possible without digital assistance), his talents as a writer are far less impressive. Not that he is a bad writer, it is clear that he has some amazing ideas; just look at his music videos if you need further proof that he is undeniably creative. Be Kind Rewind’s biggest flaws are in its pacing, and at times, its utter ridiculousness. I fully understand that in a way, Gondry is echoing the same type of bizarre surrealism perfected by Luis Bunuel, but there are times where even that can’t be used as an excuse.

The plot, in about a sentence, essentially follows two dudes who make their own ‘sweded’ versions of popular movies after the videotapes at the rental store one of them works at has all of its tapes erased. By the time this plot is established, 15 minutes has already passed, and very few laughs are to be had, which is problematic, especially for a comedy. Fortunately, the build-up is almost worth it. The ‘sweding’ or essentially re-filming of entire movies in a couple of hours, is the funniest part of the movie. Mos Def and Jack Black play just about every character, and do so in a way that simultaneously mocks and homages each film they recreate. In the film, people seem to love their sweded videos, and they become a cultural sensation. Except that there are these bad folks who want to tear down the building they work out of. Oh, and of course there’s copyright infringement. At times, the plot is a bit jumbled or ridiculous, but it almost doesn’t matter because the fake movies are just that funny.

I don’t say this often, but I think this film would be way better on DVD. I anticipate that it would have some amazing deleted scenes, or some of the full sweded movies. And since they are the best part of the films, or in a way, the sex scenes in the porn-with-a-plot, they will definitely be the most rewarding part of the watch. It’s not necessarily the fault of Gondry that this film isn’t better; in some ways, the film has a definite charm of its own, and it is his first fully American movie not written by Charlie Kaufman. With far more of a European background in ideology and filmmaking, he is quickly trying to adapt to an American plot structure, and even to a mass target audience. Science of Sleep, his last film, also struggles from a weaker script, but its international performance and style flavours tended to make it feel far more comfortable (and aesthetically, it is absolutely mesmerizing). Be Kind is less a movie about specific visuals – in a way, it’s about making them even less beautiful with a home video camera – but carries some of the same magic. I don’t think it’s right to say Gondry should just go back to making music videos, since he does have something fun and exciting with this film. I just hope he still gets a chance to make something that will make him the cinematic legend he deserves to be.

Bottom Line: Flawed, but so hilarious at times that you’ll forget that the plot is sort of silly.
Rating: PG-13
Running Time: 101 minutes
Overall Rating: