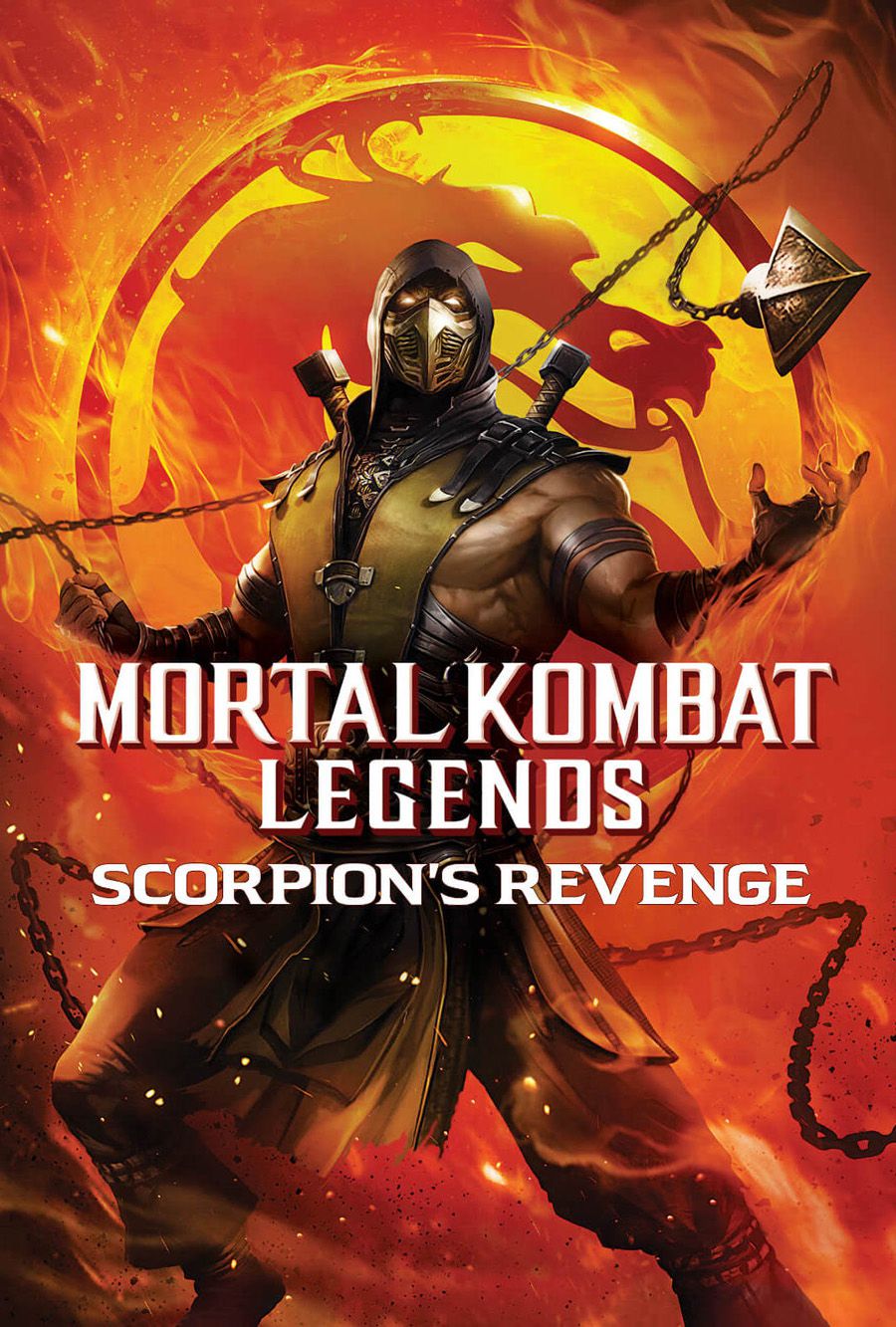 Warner Bros. Home Entertainment provided me with a free copy of this digital download that I reviewed in this post. The opinions I share are my own.

“Mortal Kombat Legends: Scorpion’s Revenge” is somewhat a reboot and mish-mash of the Mortal Kombat franchise and, according to rumors, an epilogue to an upcoming live-action movie.

The movie takes place during the tournament from the first “Mortal Kombat” video game from 1992. Lui Kang, Raiden, Shang Tsung, Goro, Sonya Blade, Johnny Cage, Kano, Scorpion and Sub-Zero are all present but with more details added to help round out their journey to the fateful tournament in the Earthrealm. Other characters from later MK games such as Jax, Quan Chi, Baraka, Kitana and Reptile show up to add depth to origin stories and sometimes to just add a little fan service to the fight scenes.

The animation style is similar to the style used for the DC animated movies but with darker shades of black prevalent which gives the movie a Mike Mignola feel. With the movie being rated “R”, the animators definitely don’t hesitate to overemphasize the blood and gore. In typical “Mortal Kombat” fashion, there are body parts flying everywhere as just about every fight scene is hyper-violent and chock full of blood and guts, spines being ripped out and decapitations. You also get the slow-motion bone-breaking animations that are common in the last few video game releases.

The title of the movie foreshadows the journey of one of the franchise’s most popular anti-heroes and the demon ninja’s quest for revenge after the death of his family at the hands of Sub-Zero and his clan. After witnessing his son’s murder by Sub-Zero, the icy killer finishes of Scorpion, then known only as Hanzo Hasashi. Hanzo awakens in the Netherrealm and fights his way to the temple of Shinnok only to encounter Quan Chi who offers him eternal life and a chance for his revenge. With newfound skills and powers, Hanzo takes the name of Scorpion and enters into Shang Tsung’s tournament as a warrior of the Netherrealm.

Breaking away from Scorpion’s story, we are shown the formation of the unorthodox Earth team. With the Outworld winning the last nine Mortal Kombat tournaments, this is the last chance for Earth to prevent an outright invasion and elimination of the world that they live in. Raiden, unlike in the original games, is sworn by oath not to interfere or fight in the tournaments, but he is the one who may choose Earth’s warriors. Lui Kang is an obvious choice, Sonya Blade is a great fighter but has a loyalty to the U.S. military and Johnny Cage…an ex-martial artist tournament fighter turned Hollywood kung fu actor, is the most unlikely of choices. All of Earth’s fighters have their own reason for being there with Johnny Cage’s being the funniest…he thinks he’s landed a great movie gig thanks to Raiden’s manipulation.

Once the group makes their way to Outworld, things begin to turn serious. Pre-tournament food and entertainment include disgusting unknown meals and the some sudden limb removal thanks to the introduction of Goro and at the expense of poor Jax.

Soon the tournament begins with the first fight being Johnny Cage vs Baraka. Johnny Cage still believes that he’s prepping for and suddenly partaking in his first action scene on the island. After an intense fight that destroys an ancient monastery and the mountainside that is sets on, Johnny Cage emerges victorious and with the belief that shit just got real.

Sonya has a quick fight with a prehistoric version of Reptile, while Lui Kang defeats Kitana without killing her. Kano arrives to help kill all of the Earthrealm fighters but Scorpion appears and helps defeat the Black Dragons led by Kano. Sub-Zero arrives and Scorpion sacrifices himself to get his revenge, impaling both of them on a spike at the bottom of a bridge. Quan Chi appears and taunts Scorpion by telling him that it was not Sub-Zero that killed his family but Quan Chi in disguise and that he expected more of his promised warrior. He then leaves Scorpion to bleed out.

Lui Kang emerges as the victor to fight against the Outworld champion Goro. He nearly suffers the same fate as Jax but Scorpion arrives to prevent the limb removal process. Shang Tsung offers Scorpion the chance to fight Lui Kang as the champion of the Neverrealm but he declines and instead takes Shang Tsung hostage thus ending the tournament. He wants his revenge against Quan Chi he accepts the undead ninja’s challenge.

Sonya and Johnny Cage manage to fight off Kano and the Black Dragons and their army of Netherrealm demons thus rescuing Jax in the process. Jax gives Kano’s head a good old fashioned curb stomp on the way out.

As Raiden and Lui Kang escape to meet up with Sonya, Cage and Jax, Scorpion gets his revenge and destroys Quan Chi in mortal combat as the palace collapses around them. It seems that Hanzo finally will finally rest in peace with his lost family.

The last scene shows Shang Tsung begging for mercy as Shao Khan rises from his throne and tells Shang Tsung that the invasion of the Earthrealm will now begin.

As I mentioned earlier, “Mortal Kombat Legends: Scorpion’s Revenge” is a much more fleshed out origin story for a franchise that, early in its inception, wasn’t heavy in the story department. Over time the following video game sequels as well as the other various forms of entertainment like comic books, animated movies and books managed to add depth to characters and the tournaments themselves. “Scorpion’s Revenge” is like a collected compendium in animated form of what is already out there in regards to the MK story.

Overall, I enjoyed most of the movie and especially Johnny Cage. His unnerving belief that everything was staged as well as his somewhat charming yet pompous attitude was reminiscent of Linden Ashbey’s spectacular performance in the first “Mortal Kombat” movie this time portrayed by Joel McHale. Raiden worked fine as a mentor and mediator, only getting involved when things were dire and it was great to see the origin of Scorpion finally fleshed out in a movie.

The things that disappointed me about this movie weren’t the liberties that were taken with some characters but were more about the lack of depth when there should have been more focus on certain characters. Lui Kang absolutely should have had more screen time explaining why he was Raiden’s number one choice, I would have liked to see how exactly Jax was captured and had a little more of his rivalry with Kano early on and I think that the Sub-Zero feud that was played up for Scorpion ended in a fizzle as his feud ended up being more with Quan Chi than the icy ninja. Even though that’s exactly how it should have played out since Quan Chi was posing as Sub-Zero and manipulating the Lin Kuei, Scorpion didn’t know that until after his battle with Sub-Zero. After the opening sequence, I feel that the classic battle between Sub-Zero and Scorpion should have had more “oomph” to it as it did. It was one of the quickest fights in the movie and was definitely a disappointment.

If you’re a fan of “Mortal Kombat” old or new, “Mortal Kombat Legends: Scorpion’s Revenge” is just about everything a fan of the franchise can ask for. Fans get a condensed retelling of the original games’ tournament but with the added depth of years of story, characters and sub-plots all in a nice convenient hour and a half. It may not bring new fans into the franchise…hopefully a new movie or animated series will fill that role, but for those familiar with the franchise, it’s a great precursor to what may be on the horizon.

Bottom Line: An ultraviolent retelling of the story of the tournament from the original “Mortal Kombat” video game that is both a cool reintroduction to the characters as well as, hopefully the start of an animated “Mortal Kombat” universe.
Running Time: 80 Mins
Rating: R
Extras Rating:
Overall Rating: