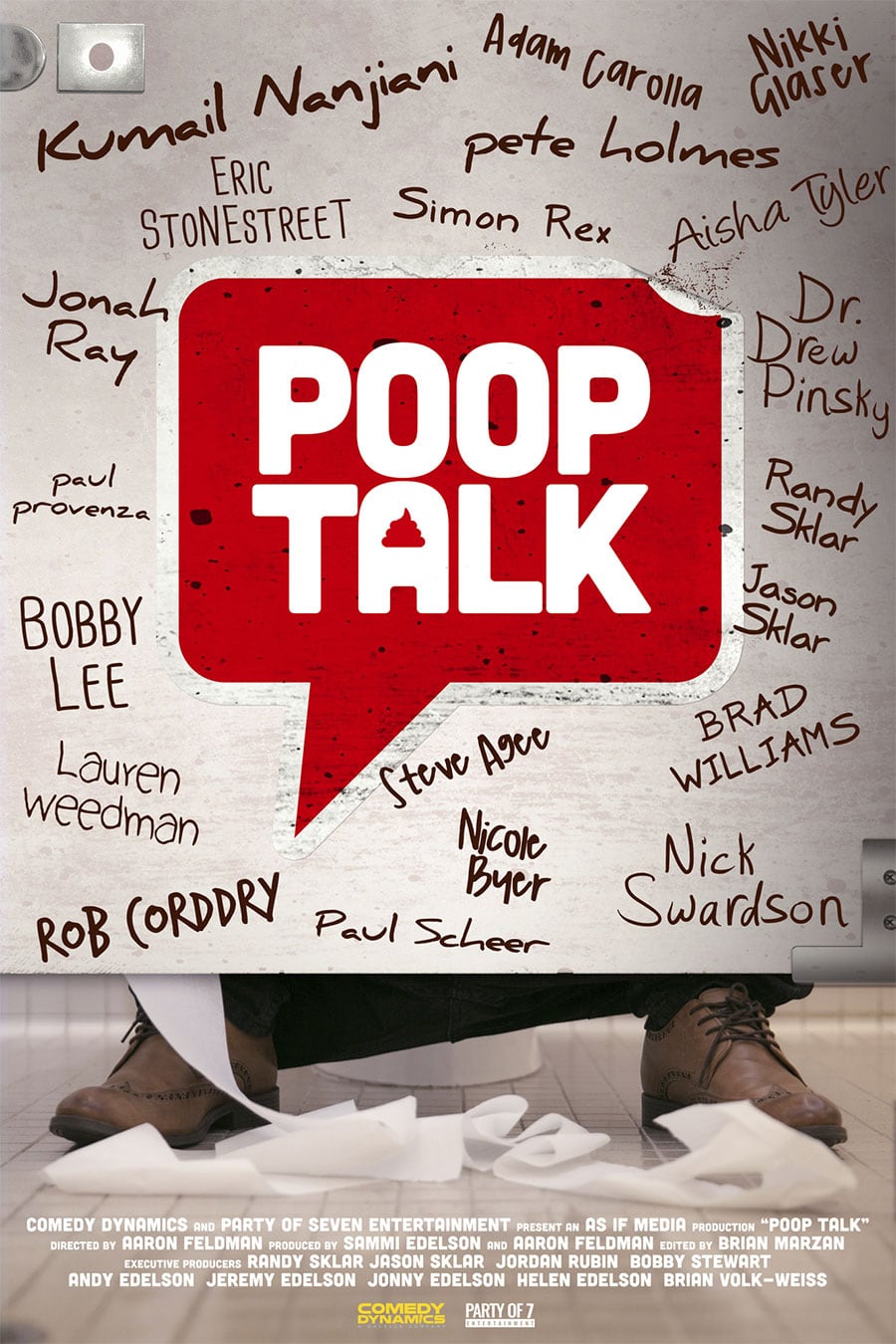 The documentary you’ve all been waiting for – a documentary about poop! Wait, where are you going?! This is a funny look at poop, shit jokes, disgusting poo stories and other things people don’t normally talk about. Except the stories are told by comedians and actors.

Poop Talk was directed by Aaron Feldman and was produced by The Sklar Brothers, who also appeared with a ton of comedians and comedic actors to discuss poop. Not only is the documentary just telling funny stories about poo, there’s also some scientific explanations about poop. Dr. Drew appears to discuss some of that stuff. The comedians tell stories about why they like talking about poop, or don’t like talking about it. They discuss the most disgusting places they’ve done it, like Jonah Ray said he did it in the ocean while a group on a boat sailed by. Others talk about why some like to just shit at home and nowhere else. Some discuss the proper way to take a shit, or crapping overseas with different styles of toilets or lack of. You can see where I’m going with the topics that are discussed and made fun of.

For my friends and family that know me, I’m usually the first one to talk about crap, farting and other stuff people usually don’t like to talk about. So if you don’t think an hour plus documentary all about pooping is your thing, don’t watch it. I was excited to watch this documentary because it seemed right up my alley. From a documentary perspective, it didn’t really offer anything except to be funny which is probably the main goal when you have comedians being interviewed. There’s some occasional clips from SNL and commercials as transitions. I kind of wish we got more of that, or more scientific stuff about shitting. Like, why is your crap green sometimes and things like that. I’m surprised there was no stories about potty training kids because I’m sure there’s plenty of stories about that. I will be finding that out shortly and already have a few horror stories from my toddler like scooping up turds in the bathtub.

The funniest stories that I can remember from the documentary is with Nick Swardson accidentally crapping into his friend’s kitchen garbage. He ends up missing and it goes all over the kitchen floor. Nick blames it on the dog and his friend ends up cleaning up Nick’s shit. Another comedian talked about overflowing the toilet at her friend’s parents house. The poo water caused a leaked and from downstairs she could hear screams from her friend’s Mom. The mom opened the lighting fixture from the ceiling and got poo water on her face. It’s things like that make you wince from the awfulness of it, but man, it’s certainly funny when it’s not happening to you.

If you’re like me and enjoy talking about crapping, you’ll like this funny documentary about it. It’s not that long and worth watching if you want to laugh for a few minutes.