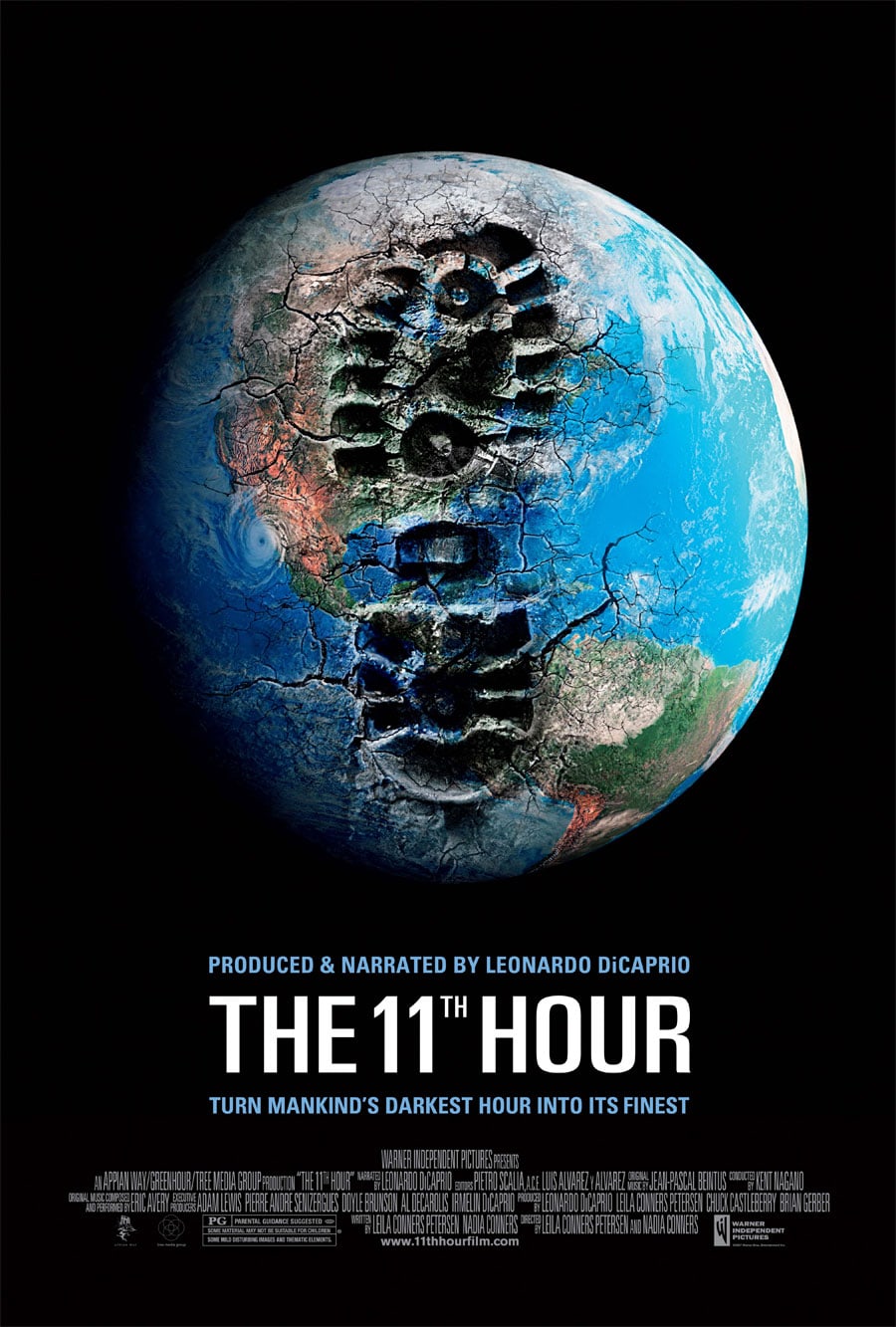 Where An Inconvenient Truth is gripping and powerful, its spiritual cousin The 11th Hour is equally dull and depressing.

In his film, Al Gore lays out the facts in an engaging lecture. While one doesn’t often think of Gore as “engaging,” his delivery in Truth is warm and even downright reassuringly fatherly compared to the doomsday scare tactics of The 11th Hour.

The 11th Hour is so effective at scaring the viewer about the imminent extinction of mankind that you feel utterly hopeless within the first 20 minutes. It makes the film feel pointless, because everything is pointless. We’re too late and we’re going to die.

That existential futility gives way to boredom early on, as the film never deviates from what I consider the worst and amateurish form of documentary the talking head. The entire 90 minutes is a series of quick cuts from one talking head to another, with each spouting a gloomy line in front of a nondescript background. It all becomes a mush of monotone words and stimulus deprivation.

If we have to live with talking heads, then I must complain again: the choice of experts is disappointing. Most are unfamiliar leaders of small environmental coalitions with hippyish names that lend themselves to snickers (Tree People, Green Worker Cooperatives, Earth Policy Institute, The Turtle Clan, Greenbelt Movement, Community Environmental Legal Defense Fund). There are also some bioengineers, environmental authors, associate professors, and so on.

They are an unremarkable group, and by that I’m not questioning their expertise or speaking ability (though many seem to be preaching to the converted), but only that their collective selection is uninspired and dull. Not to sound shallow or in need of celebrity and flash, but who the heck ARE these people? Where are the politicians, the business leaders, media figures, or ANYONE whose name I’ve heard of?

I wasn’t alone – you could hear the gasps of recognition and jolts of wakefulness in the crowd when Mikhail Gorbachev, Stephen Hawking, and former CIA director James Woolsey appear. Unfortunately, their collected screen time is probably shorter than it took to read this far.

The unrelenting talking head attack is occasionally broken up by narration from Leonardo DiCaprio, who calls in the worst performance of his career. For some reason, his voice sounds mealy and reedy, and he speaks like he’s reading lines from a teleprompter. He summarizes what you’ve already heard but repeats them with a shocked naivety that quickly becomes irritating. This sounds like exaggeration, but DiCaprio actually does voiceovers while the camera captures him gazing mournfully into the distance. Like, repeatedly. (It reminded me uncomfortably of Robert Downey Jr.’s awkward faux-naivety in his narcissistic political documentary The Last Party.)

But The 11th Hour does go one step further than Truth: it actually offers some solutions. Just when things seem totally devoid of hope, they suddenly dedicate a chunk of time to the promising future of biodesign and sustainable engineering. This was the most interesting part of the movie, but unfortunately, the topic isn’t exactly a viable solution for your average viewer who isn’t an urban planner major. The hopeful tone and interesting presentation on biodesign blew some fresh air into the film, but the shift of gears to focus on something most of us can’t directly be involved in was befuddling.

The 11th Hour is absolutely correct that the planet is in trouble and we individuals, corporations, and government need to do something. The 11th Hour has a very important message; I just wish its delivery were effective.